As late November approaches, newly elected MPs prepare to assemble in the nation’s capital for the opening of the new parliament – getting ready to push an agenda across several portfolios of health, justice, the economy, and more.

If September’s campaign period is any indication, some of Ottawa’s attention will fall on queer and trans people in Canada. All four major political parties made pledges to LGBT2Q constituents. Their promise: give us your vote, and we’ll make life better for you.

The question is, will they know where to start? Community-Based Research Centre (CBRC) has some ideas which are outlined in a new document intended to inform legislators and other decision-makers is attempting to close.

“When it comes to queer and trans priorities, political leaders tend to zero in on very specific topics,” says Jody Jollimore, CBRC’s executive director. “But as an organization that works across a spectrum of health and wellbeing needs for our communities, we know there are actually dozens of actions the new cabinet should take starting tomorrow.” 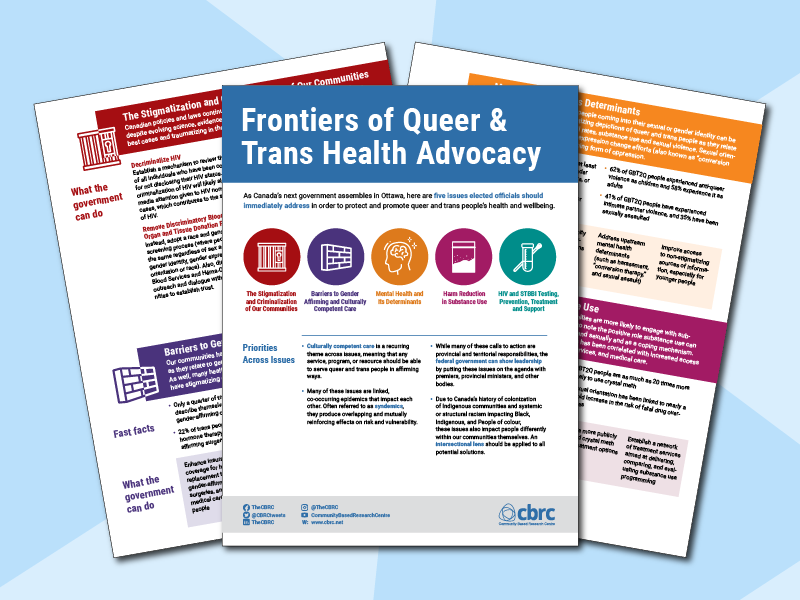 “Our hope is that by putting these issues in front of the new government we can expand our leaders’ understanding of what our communities need – and ensure services that improve health outcomes are included in the government’s Action Plan,” continued Jollimore.

Frontiers of Queer & Trans Health Advocacy includes recommendations CBRC made as part of public consultations around the first-ever Federal LGBTQ2 Action Plan, promised to be completed in the Liberal government’s first 100 days in office. CBRC intends to use the document to call for meaningful policy changes to strengthen the health and wellbeing of all people of diverse sexualities and genders across Canada.

“We want this government to know, we’re watching,” said Jollimore. “Until clear and concrete steps are taken on all fronts, we will continue to speak up, using evidence to make the case for strengthening queer and trans health.”