Newfoundland and Labrador (NL), Canada’s easternmost province has many great qualities: amazing people, colourful homes, and a welcoming nature. But one thing the province lacks? A community centre for 2S/LGBTQIA+ peoples across the province.

That’s why Quadrangle NL was founded in 2015 – to create a community centre for 2S/LGBTQIA+ individuals and organizations that can be a resource for community planning and building resilience and connection among 2S/LGBTQIA+ people. And NL definitely needs some work in accepting Two-Spirit, queer, and trans people. In CBRC’s 2019 Sex Now Survey, 43.3% of NL participants reported having experienced discrimination related to their sexual orientation, higher than the national average of 38.7%.

Evidence supports the role that 2S/LGBTQIA+ spaces can play in community development and health. Various North American studies have concluded that a lack of supportive safe spaces for queer youth leads to negative health outcomes. In response, researchers have urged community-based organizations and decision makers to provide positive environments for sexual and gender minority youth. Research has demonstrated the advantages of providing multiple 2S/LGBTQIA+ adapted services under one roof and strengthening partnerships to improve service delivery and referral protocols.

But community cannot exist without collaboration. It’s one of the reasons why Quadrangle NL works with so many varying groups, including CBRC. 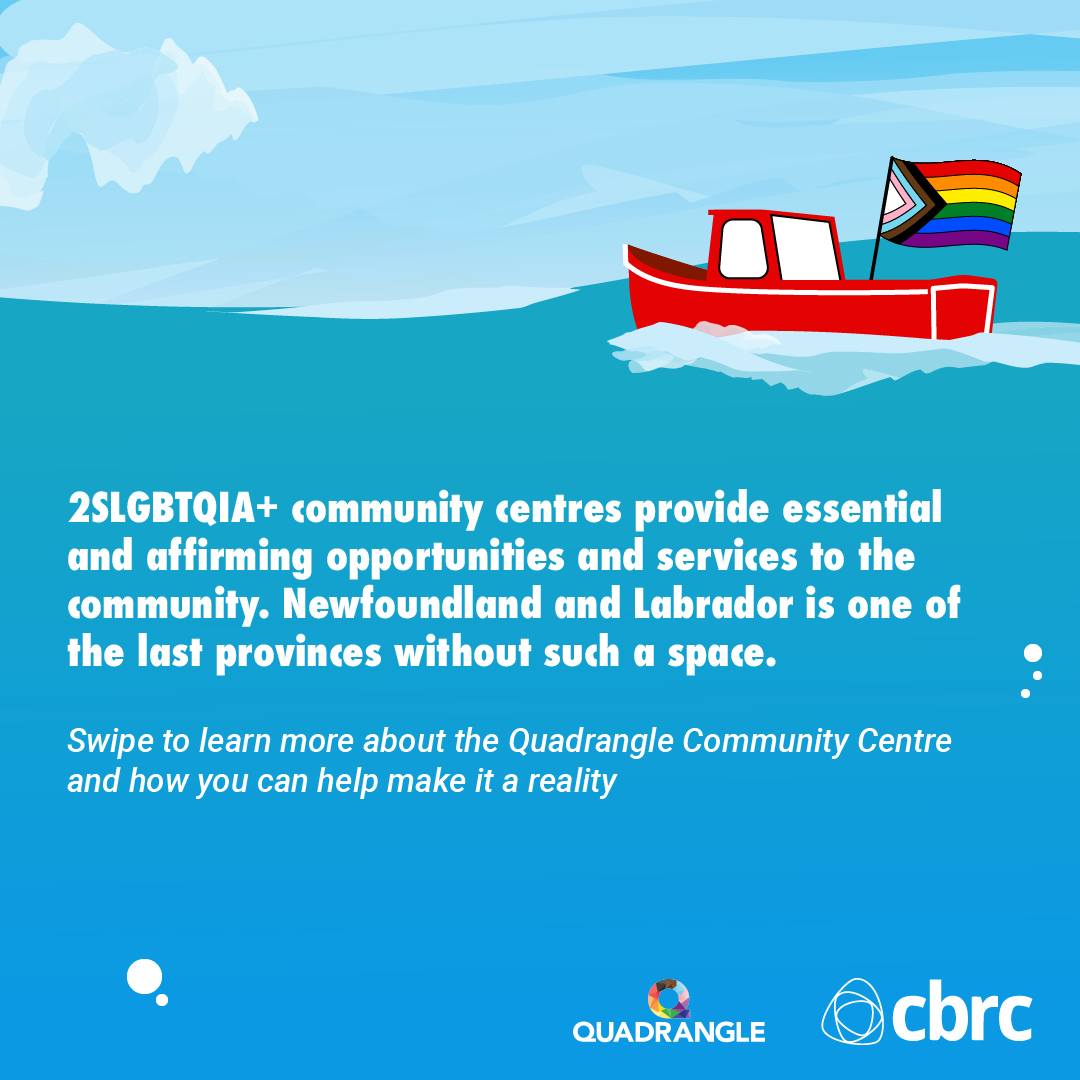 In 2021, CBRC and Quadrangle partnered on a letter-writing campaign to the provincial government about the pressing need for a dedicated community space. Almost 300 letters were sent to Premier Andrew Furey, Minister of Women and Gender Equality Pam Parsons, and Members of the House Assembly. Through CBRCs website, community members were able to enter their postal code and automatically email the Premier, the Minister, and their MHA. Letters were sent from across the province.

In tandem, Quadrangle hosted Pivot, CBRC’s advocacy skill-building program. Participants worked with community members to develop 25 policy recommendations, which are now often being used as reference points for policy discussions in meetings with government officials. And there have been many meetings with the provincial government, individual MHA legislators, and several cabinet members. The campaign also attracted some media attention with Quadrangle Executive Director Charles Murphy being interviewed on NTV.

So what’s next? While Quadrangle doesn’t have its physical space yet, the work continues. Quadrangle NL staff, volunteers, and directors are still fundraising, advocating, and pushing for a dedicated 2S/LGBTQIA space. Want to help create this space? Get involved and reach out to Quadrangle NL through their email, website, Facebook, Twitter, or Instagram.