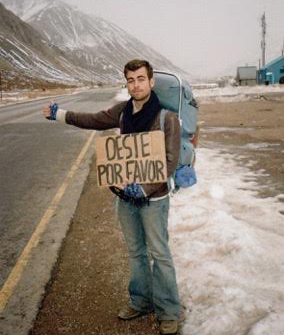 If a conversation should turn to travel, and I mention my penchant for hitchhiking, the reaction is always strong. Most people immediately worry aloud about how unsafe it must be. But even those in whom my irreverent travel stories have struck some chord of terror – once they’ve pushed beyond the horror show unfolding in their minds – are left gazing enviously down an open road of adventure and potential. Even as they insist they could never do it, their minds conjure up a Kerouac inflected image of a footloose and fancy free vagrant, plying the highways with all the time in the world.

It can feel like that, standing at the side of the road waiting for my next ride, about whom I will know nothing more than I’ve known of all the rides who’ve brought me to where I stand. Yet, for all that appearance of freedom, there’s no freeing myself from what I’ve known or who I am. My personal history affects where I’m going and how I’ll get there far more than how long it will be until that next car stops. I travel carrying most of my life on my back, but there’s no denying the invisible backpack and its tools that is also always with me. The tools that let me spurn the billboard on Highway 16 – the Highway of Tears – imploring young women not to hitchhike. The tools that provided me with the means, at age 17, with nowhere to sleep, to turn down a man driving along side me down Santa Monica Boulevard cooing “Such pretty eyes” and insisting I get in. The tools that have granted me the rides who, in only a matter of sentences, make it clear that they would not have stopped if I were not white.

Confrontations with realities like those leave a stark impression, harsher than the usual haze of heterosexist assumptions I more often face. Across tens of thousands of kilometres, and over six hundred rides, I’ve been picked up by many queer people, but, as with so much of life, the majority of those who’ve picked me up are straight. From experience, I now know it’s easiest to just say I’m Christian, when someone has stopped for me by the grace of Jesus whispering into their ear, or so they’ve told me. Some men who stop, and declaim against being anything less than straight, would likely proposition me all the same whether they knew I was gay or not. From quite a different set of experiences, I now know the stronger negotiating position is letting them think I’m straight, which is probably their fantasy anyways. With the greatest share of my rides the negotiation is fully interior: “I may be passing well enough, but what happens if I out myself?” Through the necessity of experience many of us become deft at handling such interactions and code switching, even if we may not often be so vulnerable as with a solitary ride at the setting sun, traversing some lonesome expanse. My experience has thankfully never taken me to where many people’s fearful minds first turn, but a key skill in hitchhiking is foreseeing such possibilities, hoping as I do that they will never arrive.

Whether my hitchhiking stories have elicited terror or envy, an inevitable curiosity is where I sleep. When the sun does set, and I have to viscerally confront that question, unlike the complete unpredictability of who will stop for me, when looking for a place to sleep there’s much more I can do to narrow whose attention I’m grabbing. From Tokyo to New Orleans, the situation changes considerably if there’s a gay area, or even just a bar, to go to. My backpack, clad in cardboard scrawled with my most recent destination, is a certain invitation to ask what I’m up to, and often enough, with a mutual exchange of good vibes, I end up with a place to crash for the night. Many young people travelling by thumb have that experience, though from speaking with them, it doesn’t seem to happen nearly so often as it seems to for me. What seems to separate us is that the ‘pervs’ whom my gruffer, straight compatriots of the road are quick to brush off happen to be just the people I’m looking for. Certainly, the young straight couple fresh off the freeway and busking on the corner aren’t seeking the same night time connection as I am.

Nevertheless, while the excitement of finding that night’s bed off the street or from a bar can be a tantalizing high, what can be done when dropped off in Deer Lake, Newfoundland or Topeka, Kansas? Walking those streets would sooner have the police stop to question me than provide a place to sleep. In years past I would unfurl my tent in whatever cranny I judged adequate. Once I owned a smart phone though, I could put cruising apps to a whole new use. “I’ve always depended on the kindness of strangers” was my Grindr profile’s headline, before a brief description of where I’ve come from, am headed, and the open invitation that I’m looking for a place to crash. It rarely took long, even in the most remote locales, to get a few messages, many simply dumbfounded and amazed that anyone still hitchhikes. Inevitably I’d be offered an explicit exchange, but a little patience nearly always garnered more earnest replies and, often enough, somewhere for the night.

With no further explanation, nearly everyone who hears these stories assumes that when I meet these men something more is being put out than fresh sheets. Yet, as was initially to my own amazement, and though some of them would have probably liked to know me so, I’ve rarely encountered that expectation and almost never have felt pressured to do so, even as a 17-year old vagrant plucked off of Market Street near the Castro. It feels far more like tapping into the ‘secret club’ that being gay was once described as, but perhaps taken a step further. It recalls Kurt Vonnegut’s romantic proposal to combat the lonely anonymity of modernity by assigning everyone to a group, so that no matter where you may find yourself, you’ll know someone. In a word, community.

Certainly, I’ve found far more community in being gay than with many of my fellow vagrants, who so often are as prejudiced by heteronormative society as any other group. I gladly proclaim that all of my rides, from the church going to the meth slamming, have picked me up only to help me along my way. But such kindness does not equal belonging. Yet, by depending on the kindness of fellow queer men that I’ve met on my journeys, my experience colours a very different gay world than one of cold shoulder cliques and shrivelling gay villages. Instead, in countless cities and towns that I’ve sought or ended up in, I’ve had the privilege to discover genuine warmth and hospitality – an acceptance beyond anything conventional gay narratives would lead me to expect. Though we’re so often taught to be wary and on guard, it has only been by exposing my vulnerabilities that I’ve found true connection.