By Survivors, For Survivors: My Experience Leading the SOGIECE/CT Survivor Support Project

Conversion “therapy” (CT) and other attempts to change someone’s sexuality, gender identity or expression causes trauma and lasting harm to 2SLGBTQ+ people. What kinds of support do survivors need to help them heal?

From April to September last year, I engaged with hundreds of survivors of sexual orientation and gender identity and expression change efforts (SOGIECE) as they shared the challenges they faced in recovery. Their pain, anger, and shame, weighed heavy on my heart.

The SOGIECE/CT Survivor Support Project, a community-based research study led by survivors for survivors, engaged with those who have been harmed in order to identify the barriers faced, the resources helpful during recovery, and the supports needed. The full report is available here, and we will be presenting the results during a live webinar on April 7. 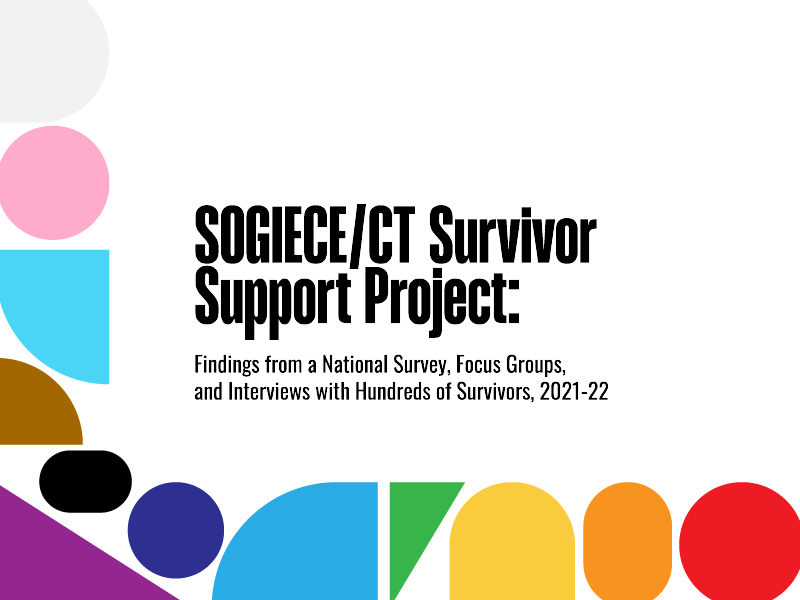 One thing from the findings stood out clearly: survivors described an alarming lack of support.

Conversion therapy is now illegal in Canada, thanks to Bill C-4, which passed in December and became law on January 7. However, conversion practices and programs are not easily defined or identified, and often capture only a fragment of pressures and messages that could be considered SOGIECE. The project used SOGIECE as an umbrella term to encompass a wide range of practices—including conversion therapy.

SOGIECE is experienced as subtle or blatant practices, pressures, or messages that attempt to alter or suppress one’s sexual orientation, gender identity or expression—which many 2SLGBTQ+ people have experienced to some degree.

To effectively support people who’ve experienced SOGIECE/CT, we need to recognize the effects are unique for each survivor. Typically, the harm experienced is traumatic and deeply internalized. Barriers include the challenge of overcoming shame, knowing how much to share and with whom, overcoming internalized homophobia/biphobia/transphobia, and restoring personal agency and self-worth.

We also found that the act of recognizing the harm done is a crucial part of the recovery process. Healing becomes possible when we find safe and supportive places and relationships and leave non-affirming ones. But healing is not always straightforward.

Survivors have identified the need for a variety of supports including education and increased awareness about SOGIECE and conversion practices. Also needed are access to affirming therapists experienced with SOGIECE/CT trauma (including religious trauma), safe spaces and networks, and access to affirming healthcare practitioners who are aware of SOGIECE/CT and equipped to support survivors.

In January of 2021 when I was asked to be the project coordinator, I was hesitant because I wasn’t sure that my experience could be classified as SOGIECE or CT. I never attended a formalized conversion therapy program or camp run by a religious organization. I never experienced healthcare practitioners misdiagnosing me or refusing me access to care. I was doing what many of the participants of this project did—questioning the validity of my experience.

In reality, I spent 27 years internalizing conversion therapy practices through prayer, the study of religious texts, disassociation from my body, and suppression/denial of my sexual and gender identities. I spent 6 years in counseling and change attempts using conversion therapy practices. I came out as a lesbian at age 33, and as a trans man at age 51. I am now 61 (and queerly heterosexual), but I spent decades of my life hiding in shame and fear, and struggled with suicidal ideation until my mid-30’s.

I, too, have experienced the subtle and blatant pressures to suppress, deny, and change my sexual orientation, gender identity and expression—known as SOGIECE. I AM a survivor. 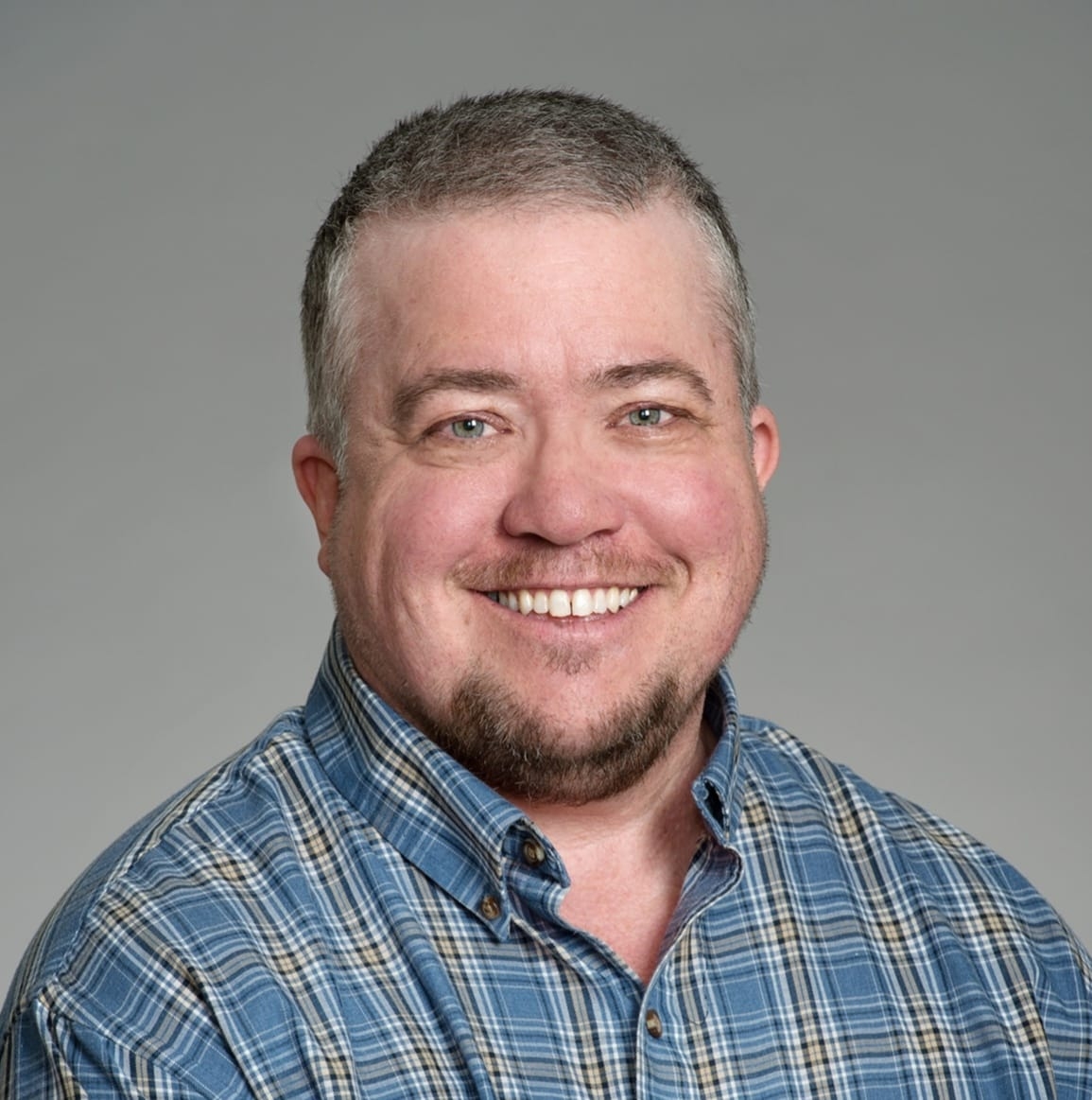 As participants of the SOGIECE/CT Survivor Support Project spoke, I identified with their rage at systems and people who silenced us, broke us, and spat us out. In focus groups and interviews I was triggered back to my own pain and trauma, and had to set it aside in order to listen, hear, and provide safety for the survivors who were speaking. After focus groups and interviews had ended, I often burst into tears.

At times I wanted to crawl away and hide—be distracted by anything that silenced the emptiness, the pain, the wounds deep inside. I realized that in some ways, I am still more comfortable in shame, silence, and disassociation, than any other way of being and living.

But I was also filled with wonderment at the resiliency and courage of every single one of the participants.

Findings from this study are key in advancing our understanding of SOGIECE/CT survivors’ experiences. But more work, including more research with survivors from marginalized communities, is needed to build the resources and equitable support systems to respond to SOGIECE/CT-related harm.

Survivors have been abused, silenced, oppressed, and traumatized—by blatant messages and pressures, violent acts and words, and ongoing microaggressions that can leave us feeling hopeless and lost. It is time to build a support system to respond.

Many of us have healed from the harm and are living joyfully. We are everywhere: in the 2SLGBTQ+ community, in all religions, and in Canada’s healthcare system. But this is not the case for all.

Many of us did not survive, choosing to end the pain and shame through suicide. Many of us are still victims in one way or another, still silenced by the shame, still afraid of being seen as we are. 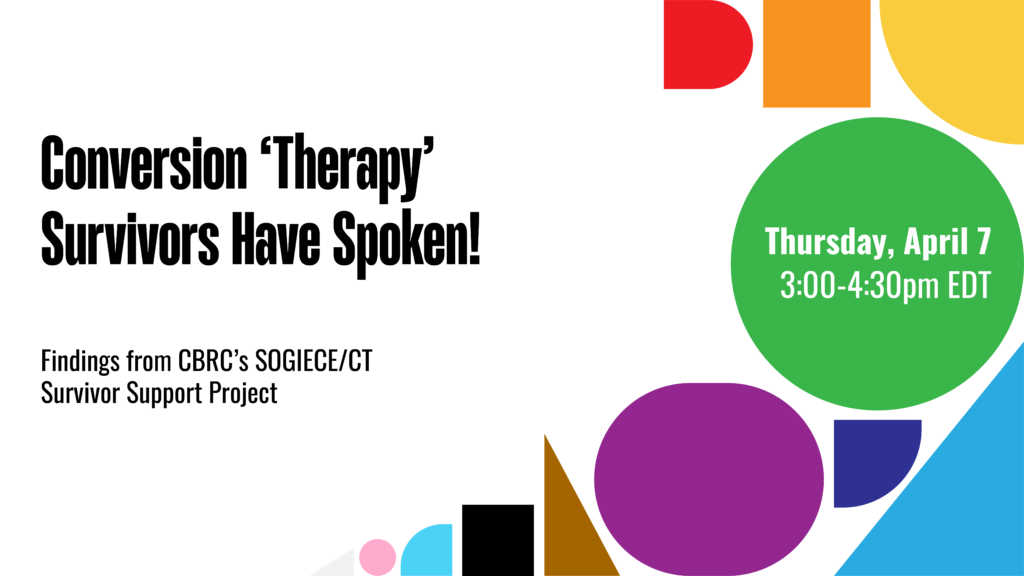 Click here to sign up for the Conversion Therapy Survivors Have Spoken! Findings from CBRC's SOGIECE/CT Survivor Support Project webinar on Thursday, April 7, 2022.