The International AIDS Conference was held in Montreal last month, and some CBRC staff were in attendance—presenting our work, making connections, and advocating for more resources and supports for our communities.

Here’s what some of our participating team members had to say about the experience.

“It was an action packed eight days of learning, love, strength, connection, and creating a new family. From the first day of the Indigenous Pre-conference to the closing ceremonies, there were many moments of deep reflection on my current role within HIV work and what’s to come. The Two-Spirit Team was able to present and speak about the Medicine Bundle Project to folks from all around the world and were met with an abundance of support and love. Overall, I feel that the sessions were extremely important, but the connections I made between sessions and in the Global Village were life changing.” 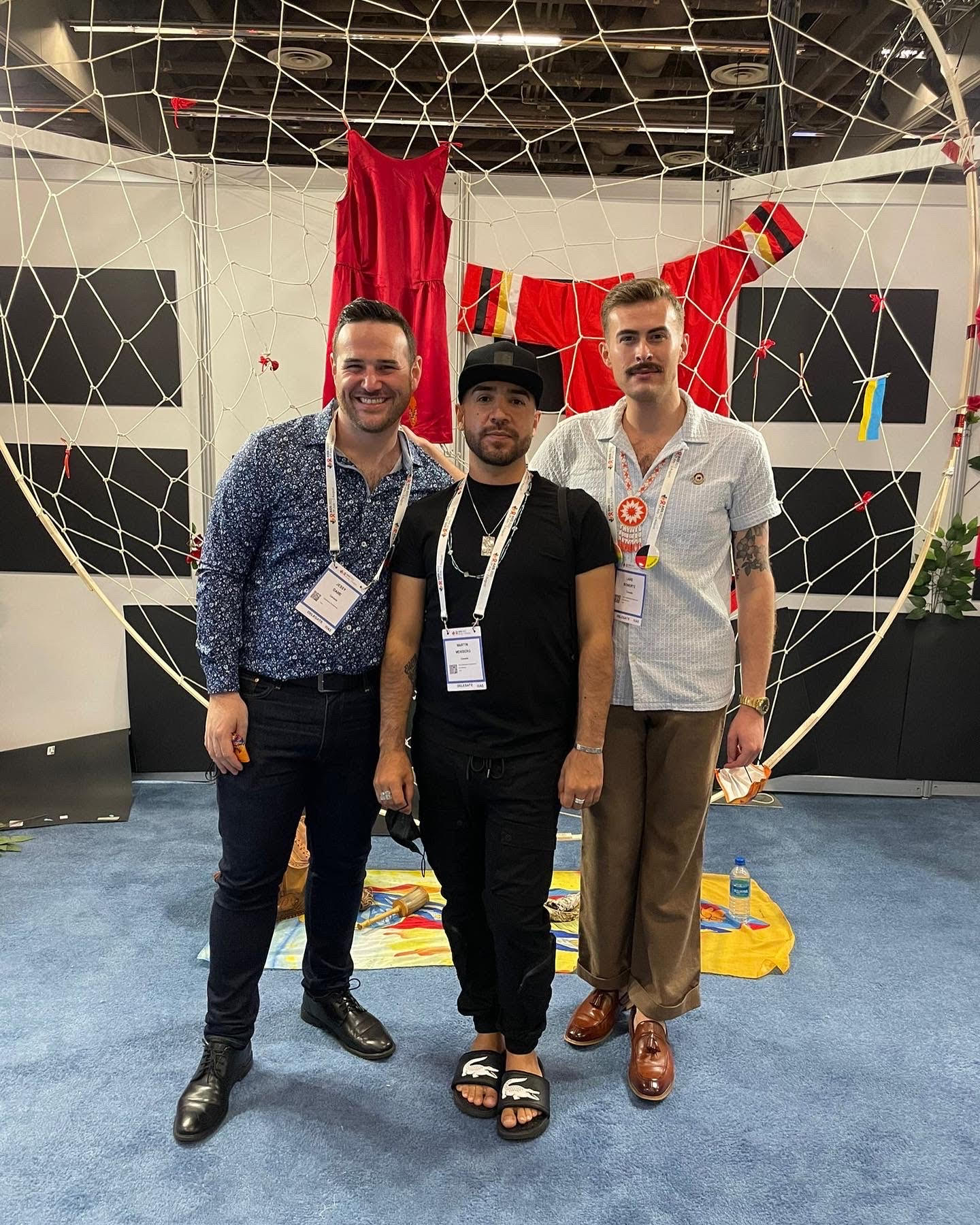 “I heard from delegates and presenters that the issues we’re facing in Canada related to HIV testing, prevention and care are paralleled in most other countries. Although our work in self-testing and self-sampling for HIV and other STBBIs is further ahead in some areas, like the involvement of community, it is lagging in others—many other countries have national programs. The experience reinforced the need for global equity to stop the spread of infectious disease—but unfortunately, we couldn’t benefit from the experience of so many delegates from other countries, due to shameful visa denials by Canadian government officials. We need equity whether it comes to HIV, mpox, or COVID-19.”

“Our Sex Now research on U=U trends received the AIDS 2022 IAS/ANRS Lange/van Tongeren Prize for Young Investigators Track E—the top scoring abstract in implementation science! To have Sex Now research highlighted and profiled on this international stage was pretty special, especially as our team was in the field doing data collection for the next round of Sex Now at the same time. The work and team never stop! It was also amazing that two of the four Early Career scholars invited by Canadian Institutes of Health Research for a symposium at the conference were our very own research affiliates Dr. Kiffer Card and Dr. Rusty Souleymanov. CBRC showed up in explicit and quiet ways in so many different parts of this meeting. Some folks may not realize, but this is the largest and preeminent HIV research gathering in the world. This speaks to the talent of people and the incredible impact and relevance of our work not just here in Canada but abroad too.” 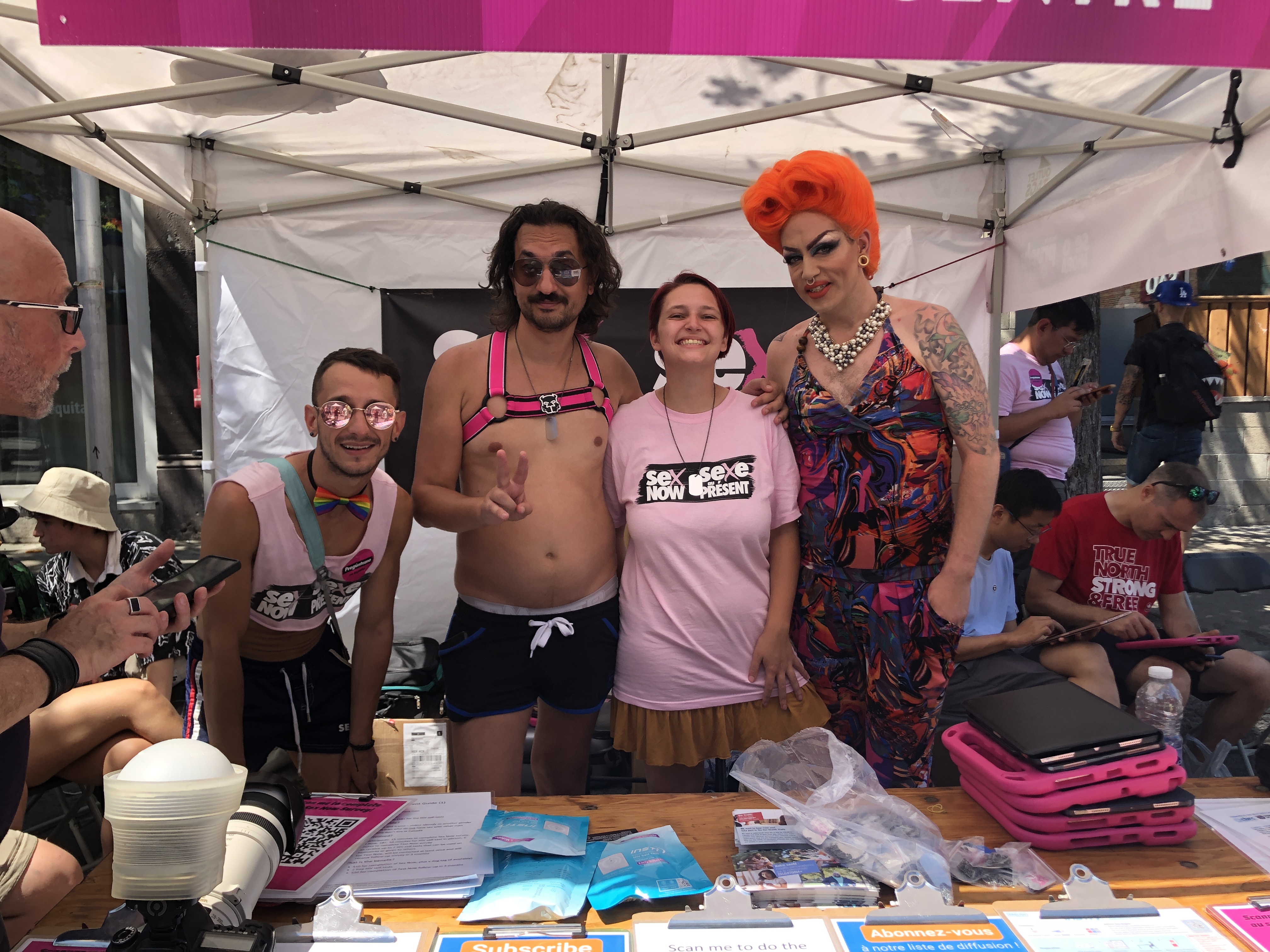 Photo caption: The Sex Now Research Team in Montreal to collect data for 2022

“Being able to share the Medicine Bundle at the Indigenous Pre-conference, and within the World AIDS Global Village with others doing work in HIV testing, treatment, and prevention, was a privilege and truly affirming experience. The energy that could be felt in the space after being unable to gather in-person was welcomed after so much time apart. The sessions were informative, but what stood out to me was how numbers and statistics still often fall short in capturing the reality of people’s stories and experiences. It was in those quieter moments of meeting people one-on-one, listening, and hearing what motivates them to do the work that they do, wherein I truly learned the most. There needs to be a continued and conscious inclusion of Indigenous people in these spaces, especially when such a globally expansive opportunity for collaboration is hosted on Turtle Island. Allowing advocacy and activism to emerge from the strengths of our communities is the true key to achieving our goals, like the UNAIDS vision to end the AIDS epidemic by 2030. The demonstrations and protests that occurred were very moving and made it clear there are still so many voices at the grassroots level missing from the conversation that need to be elevated, heard, and taken seriously."

“Attending and presenting at my first-ever International AIDS Conference was in many ways a small dream come true—having worked in the sector for the better part of two decades, this felt like a long time coming.

“To be sure, there were serious challenges with AIDS 2022, including the large number of international visa delays and denials and the relative absence of our political leaders during the conference opening, contributing to a sense that Canada had fallen short of expectations as the host. However, it was still an incredible opportunity for community leaders, researchers, and activists in Canada and around the world to showcase their work and leverage the conference as an amazing learning and networking space. The most inspiring moments for me were the activist demonstrations that took place throughout the conference. From the opening to the closing, activists took to the stage at key moments throughout the conference to demand better and more from governments, pharmaceutical companies, and researchers—to ensure the needs and the voice of communities most impacted by HIV and infectious diseases are centered.

“Being able to participate in the monkeypox (mpox) demonstration was especially energizing! It was an important moment of solidarity on the need for global action and a plan, and to call out the inaction of rich nations (including Canada) on the global shortage of vaccines, the lack of supports for people with mpox, and the inequities experienced by African nations and communities who have been dealing with this virus for 50 years. While Canada has been a global leader in the vaccine rollout, and getting it quickly to communities most affected by mpox, we too are still overlooking what people who are getting it are going through, including significant pain and stigma, as well as loss of income and support. We need a compassionate approach to support people with mpox, in Canada and around the world.” 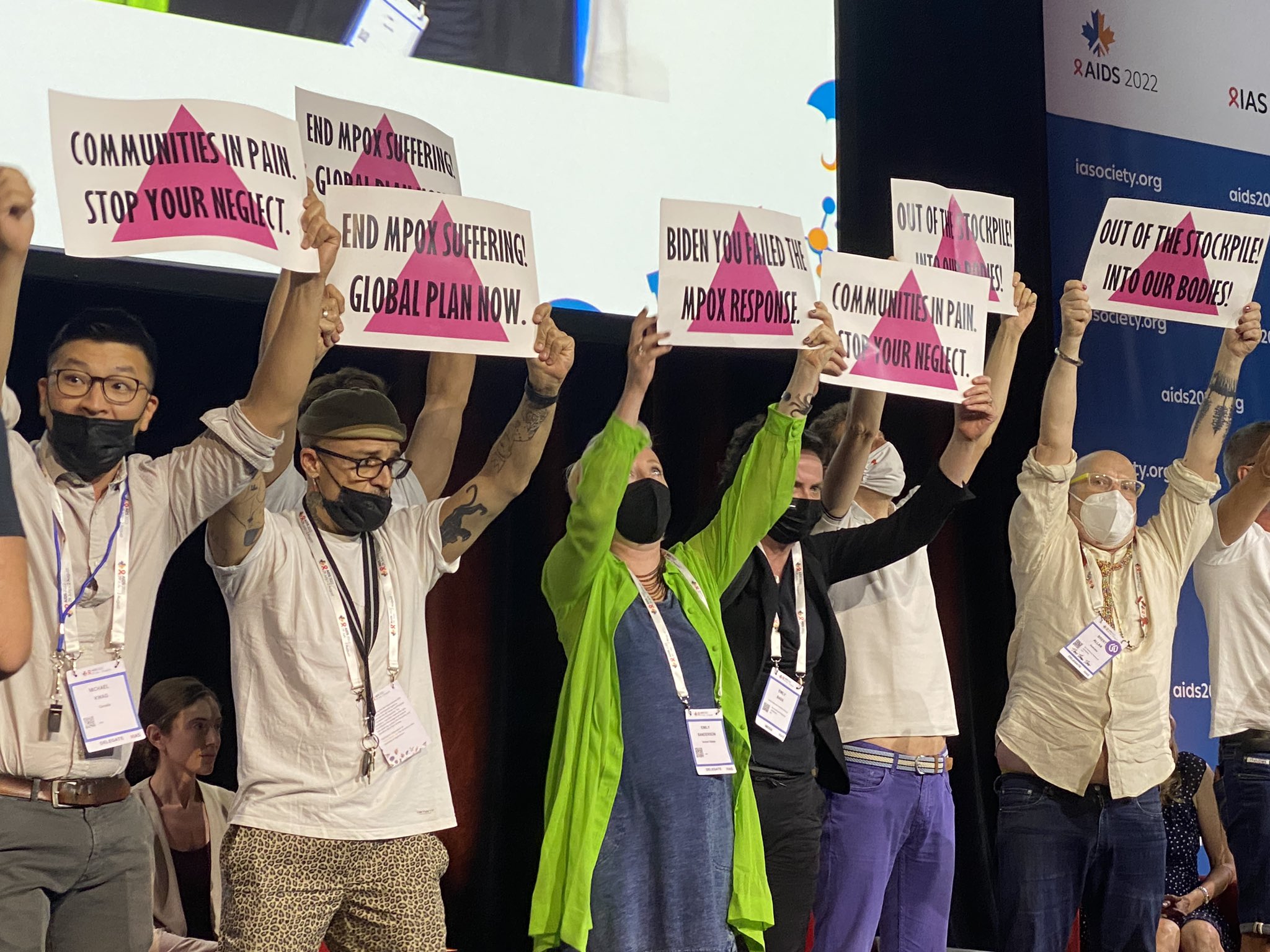 Photo caption: The mpox demonstration at the 2022 International AIDS Conference, with Michael Kwag at far left. Photo by Liz Highleyman, from Twitter (@LizHighleyman)