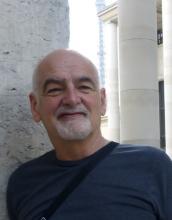 I was born in Kirkland Lake, a hole-in-the-bush mining town in northeastern Ontario. My grandfather owned the biggest business in town: hardware, lumber, prospecting supplies, fishing tackle and groceries. But rumours that the gold was running out sent my dad and mom packing south and I did most of my growing up in Toronto.

When ARVs arrived I was aiming to get away from HIV prevention–into something more generic like health and social policy. Almost all my friends that I came out with had died in the epidemic along with my passion for AIDS work. I consulted in the cancer field for a while. But I kept being pulled back to CBRC to run gay men’s health surveys. They were stressful, hard to fund, white-knuckle initiatives, and community based research was edgy politically in the HIV research field. But our successes with sampling and the data we gathered were hard to ignore. I could see for myself that gay men were not getting the attention or resources needed to make any serious difference in the resurgent epidemic. The injustice of it all had me returning like a moth to the flame.

Versatile, isn’t everybody? What would we really know without counting? How would we know what’s really going on without thick description? You could make a lifetime practice of either discipline but you really need both to grasp the emerging world. I graduated from University of Toronto with one of the earliest qualitative dissertations in the sociology of education. Interpretative phenomenology was leading edge at the time and I felt on top of the world having mastered it. But I soon found qualitative a very hard sell in the real world, even in the AIDS research juggernaut. Everyone wanted numbers. So that brought me back to my undergrad roots in survey research. Nonetheless, I still go both ways.

I think we’re affected most by gender politics. The way we do masculine gender in everyday life controls the powers we can exercise. So being publicly gay, even in the Internet age, is still a major political statement. Despite, human rights protection and gay marriage, one in five Canadian gay men experience employment discrimination: rejection, dismissal or restricted advancement. The one key factor is being “out” in the workplace. Bisexual men who are more apt to conceal their sexual identity are hardly touched. The health consequences of this prejudice are very large. One in five men who’ve experienced employment discrimination due to sexuality attempt suicide.

It’s not really about gay men’s health per se but Elizabeth Pisani’s Wisdom of Whores really captures what were up against with HIV, health and gender politics on an international scale. Once you’ve read it you can’t help but see that gay men have been treated the same way in Canada. Bottom of the HIV funding heap. We hardly even exist in Canadian health policy and it’s only just recently that sexual orientation was added to the Canadian Community Health Survey.

Actually, just trying to find the fabled “Club Pegasus” turned out to be one of the crazy funny moments of a lifetime. A group of us at a conference in Yokohama searched aimlessly through the dodgy Nogecho district for a sign depicting a noble, winged horse. No wonder we couldn’t find it. The sign was in Japanese script. Just the beginning of a crazy night with the Geisha boys.

1) What makes you happy? 2) What are you going to change?

Love everything about him, even the way he irks you.

At the moment we’re designing the next iteration of the Sex Now survey which will be launched later in the summer of 2014. We’re interested in what defines generations of gay men. The changing social and political environment as we come of age has created large and interesting differences that we think will eventually affect our collective health.

My most recent work has been on employment discrimination from the Sex Now survey 2011. Finding yourself in career difficulty due to being gay is really treacherous and stressful. It’s a very painful experience and laws alone don’t seem to be able to stop it because so much of sexual prejudice remains hidden behind the scenes.

Funded as an important and necessary community health development activity. And dare I add, a graduate-level health specialty.