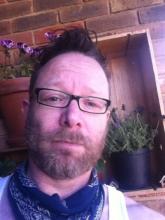 I was born in the summer of love in Worthing – a small seaside town just along the coast from Brighton, England. I don’t remember much about it, as my folks moved when I was very young. But I understand that riots against the Salvation Army and visits from Oscar Wilde ruined Worthing’s reputation.

I started volunteering on Norwich AIDS Helpline in the late 80s and pretty quickly established that such passive volunteering wasn’t for me. After seeing insipid HIV prevention I started a community gay men’s health project with a friend, and translated the international development skills I’d just learnt at university to my immediate community. In the mid 90s, travelling across the USA and Canada, I became inspired by the evolving gay men’s health movement in North America. A number of amazing mentors spurred me and influenced me.

If there was a hanky code for this, the hanky embossed with the letters, rather than the numbers, would be firmly in my left back pocket. I’d like to say I’m more versatile – but once the numbers get too big, they just hurt too much to enjoy.

Socioeconomic determinants, for sure but increasingly I’d say ethnicity and gender.

I’ve always found Eric Rofe’s Dry Bones Breathe hugely inspiring and compelling. The Times As It Knows Us in Allen Barnett’s The Body And Its Dangers is a reading I’ve come back to time and time again, especially when faced with grief. It’s about a bunch of guys spending a summer together on Fire Island in the 80s. And anything by Alison Bechdel – especially Fun Home.

Too many to mention – but one that stands out is the night I finally got to talk to Brent Allan (a Canadian working and living in Australia) at the Geneva AIDS conference: we’d been grinning at each other for the whole of the conference and finally got to chat in a bar in Geneva on the last night of the conference. He became one of my best friends and we ended up doing some amazing international collaborations. He remains a huge inspiration. And we’ve had very many gay bar moments together since.

What one thing could you do to make the world a better place? How do you intend to achieve that?

I have a hybrid work week: I’m in the very final throws of completing my doctoral thesis; I work for 3 days at week in a wonderful team at Sigma Research at LSHTM focusing on intervention evaluation; in addition I teach on the Health Promotion MSc at LSHTM.  I also ensure I find time for community activism. Right now this involves community PrEP activism and education, and local neighbourhood planning and community environmental and health activism in east London – this keeps me grounded and focused.

I’m sprinting to the finish line to complete my doctoral thesis – on the acceptability of PrEP in gay men in London. I’ve also just completed a text-book on health promotion practice. I’m writing about social media and health, and about outreach models for HIV prevention. Much of my very recent and immediate writing has involved drafting a plan for a documentary on UK HIV activism.

I’ve been fortunate to have been shaped, influenced and mentored by some amazing men. And these are the men I admire.  Michael Crosby and Michael Hurley have been the most amazing long-distance mentors professionally and personally since the late 90s: Michael Hurley can turn a conference presentation into a piece of most beautiful poetry. Recently I’ve hugely admired a handful of trans* health activists (not all gay) who I’ve had the fortune to work with, specially the guys at TransBareAll. Marc Thompson, a gay man based in Brixton, is one of my daily touchstones. He’s a man of such integrity and passion and I admire him for his activism across a number of areas. He’s also one of the few people who can tell me when I’m getting out of focus (and who can get away with it!).