Sex work in Montreal: When stigma takes its toll 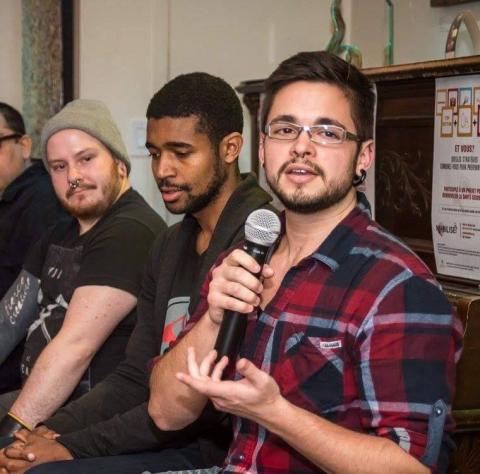 When I was in high school, I made a deliberate effort to keep my wrists stiff so that nothing about my body language would “look gay.” In gym or between classes, limp wrists were something to be avoided at all costs if I didn’t want others to stare or laugh at me. Looking back, I find it absurd that I thought this was a solution, but most of all, that that it worked! It’s a bit silly, but keeping my wrists stiff as a teenager was one of the more benign physical forms that stigma took for me.

Those were the days when, along with my first queer friend, I discovered the gay village. Those were also the days when I was more exposed to the poverty that exists all through the village. It wasn’t a secret that Montreal’s gay village was a neighbourhood with a lot of inequality. Just two blocks away from the large penthouses is the Refuge des Jeunes, one of the city’s best known youth shelters. The fancy restaurants are located right next to the small bars where the sex workers try to maintain a changing clientele, and all you have to do is step into the right alleyway and you’ll find traces of a hidden population of injectable or inhalable drug users.

The village, with its ugly but profitable way of hiding the most vulnerable people, has always been the biggest question mark for me in my experience as a gay person who faces stigma. If we (literally) had to build a village to protect ourselves against discrimination from others, why, as a community, do we continue to perpetuate racist, misogynistic, transphobic, homophobic or classist ideas? I’ve always thought that someone who’s experienced stigma wouldn’t want to stigmatize others. I guess I was wrong, but that didn’t stop me from taking on, in a small way, the role of educating others as my job.

I work with sex workers every day, including men and trans people. They all come from different backgrounds. The one thing they have in common is the stigma they experience. Sex workers are among the most marginalized and are therefore more at risk of having no fixed address, developing mental health or drug problems, being victims of violence or contracting HIV/hepatitis C. Most of the men in the program are heterosexual but because they have male clients they are assumed to be homosexual. They experience homophobia in a unique way. The trans people who my team see as part of their work face their own particular form of transphobia.

It became clear very quickly for me that piling one stigma on top of another doesn’t just add them together, it multiplies them. But recognizing the extreme vulnerability of people who find themselves at the point where stigmas intersect also means recognizing the huge potential that can come from their resistance to this stigma.

This stigma often manifests itself in a concrete way in the difficulty my participants have when they have to access legal or health services, the obstacles they face when they want to rent an apartment, or in the police repression that’s meant to be an expression of the will of the people. For a sex worker, stigma also means having to remain silent when facing violence from a client and hiding the source of their income from loved ones out of fear of judgment.

One of my participants told me about recently going to a clinic in a suburb of Montreal to get tested. When he mentioned that he did sex work, the nurse told him they couldn’t provide him with service and that he should go downtown. Another one of my participants, during a telephone interview to be admitted into an emergency shelter was refused access when he mentioned his sex work as a source of income. One of my female participants sometimes dresses as a man in order to sleep at a shelter because the social workers would otherwise be worried for her safety. In all of these cases, they have to hide a part of themselves – like my limp wrists, in a way.

In my opinion there are two ways to manage stigma. The easy solution is to pass it on to someone else. For example, allowing others to think that a trans man is less of a man in order to feel more manly, insulting injectable drug users because “we inhale ours,” or even by being constantly but subtly misogynistic because we’ve been told our whole lives that we’re too feminine. The hard but productive solution is to reflect on the stigma that we place on others, to be able to look inside ourselves and see what we’ve internalized, and then to fight it! The best way to do this, I believe, is to talk about it as a community. What do you think?