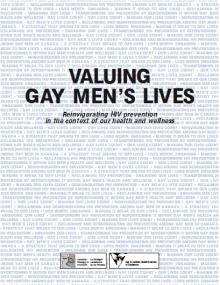 Gay men, their communities and informal networks in Canada have long demonstrated courageous initiative and incisive analyses in addressing conditions for their health and wellness. This strategy document builds on those strengths. A convergence of recently changing contexts, including gay communities, their changing experience of HIV and their relation to it, as well as the context of federal health policy, has shifted the ground of HIV prevention among gay men in Canada. Gay men, by far the population in Canada with the highest rate of people living with HIV, have been creatively and competently addressing such changes during the past five years or so. However, they have been doing so without the support of a coordinated national strategy and the significant resources mobilized by it. This document aims to address that situation by proposing the framework of such a national strategy, taking the lead from gay men active within their communities. The National Reference Group, composed of gay men of a diversity of fields from across Canada and convened by the HIV/AIDS Policy, Coordination and Programs Division of Health Canada, presents this blueprint to the HIV/AIDS Policy, Coordination and Programs Division to inform and guide their analysis and action.

Drawing on a substantial research report commissioned by the Gay and Lesbian Health Services of Saskatoon, this strategy document at its core seeks to value the lives of gay men in their wide range of backgrounds, life conditions, environments, and varied efforts of individual and community empowerment. A statement of values anchors the proposed strategy. A preface and context set the background of the strategy. This background includes a recent emergence of activity in Canada on gay men’s health, including yet going far beyond HIV-related preoccupations, which has given rise to a re-defined framework for effective HIV prevention. The strategy document presents this framework of gay men’s health, and also critically engages with a Population Health framework in a way that reformulates it to speak to the lives of gay men. The strategy document resituates HIV prevention within the contexts of both gay men’s health and a reformulated Population Health framework, and actively draws out critical implications. The document presents these implications with reference to analysis and action on the multiple contexts of sex and of gay men’s lives, to building and sustaining communities capable of HIV prevention, and to research. The strategy document throughout offers recommendations for action by Health Canada, and these are compiled in Annex I.

Grounded in work already present within many gay communities in Canada, this strategy document serves as a springboard toward sustaining a new era of action on HIV prevention among gay men. This reachable goal is an expression of valuing gay men’s lives.