When it comes to the health of gay, bi, trans, Two-Spirit and queer (GBT2Q) men, timely data isn’t always accessible to groups fighting to improve outcomes for the community.

In response, Advance – a coalition of GBT2Q organizations dedicated to strengthening access and uptake of health services for these communities – released their first Progress Card earlier this year. Their goal: to provide public sector decision-makers and community service providers with national data on key indicators relevant to queer and trans health, informed by Canada’s largest and longest running GBT2Q health survey.

Yet the life of a queer or trans person living in Vancouver might be very different from someone in Winnipeg or Halifax, for instance.

“As we’ve been going through the process of making these Progress Cards, it’s become increasingly apparent how each city seems to have its own unique profile in terms of strengths and areas for improvement,” said Len Tooley, Director of Evaluation and Advancement at the Community-Based Research Centre, who has led the development of the Progress Cards.

These regional variables are why Advance is now releasing a series of local, city-specific cards – ones focused on highlighting health trends for GBT2Q men in Calgary, Edmonton, Halifax, London, Montreal, Ottawa, Toronto, Vancouver and Winnipeg. By isolating local data, organizations in these cities are better able to guide investment, attention and other supports toward specific heath issues. 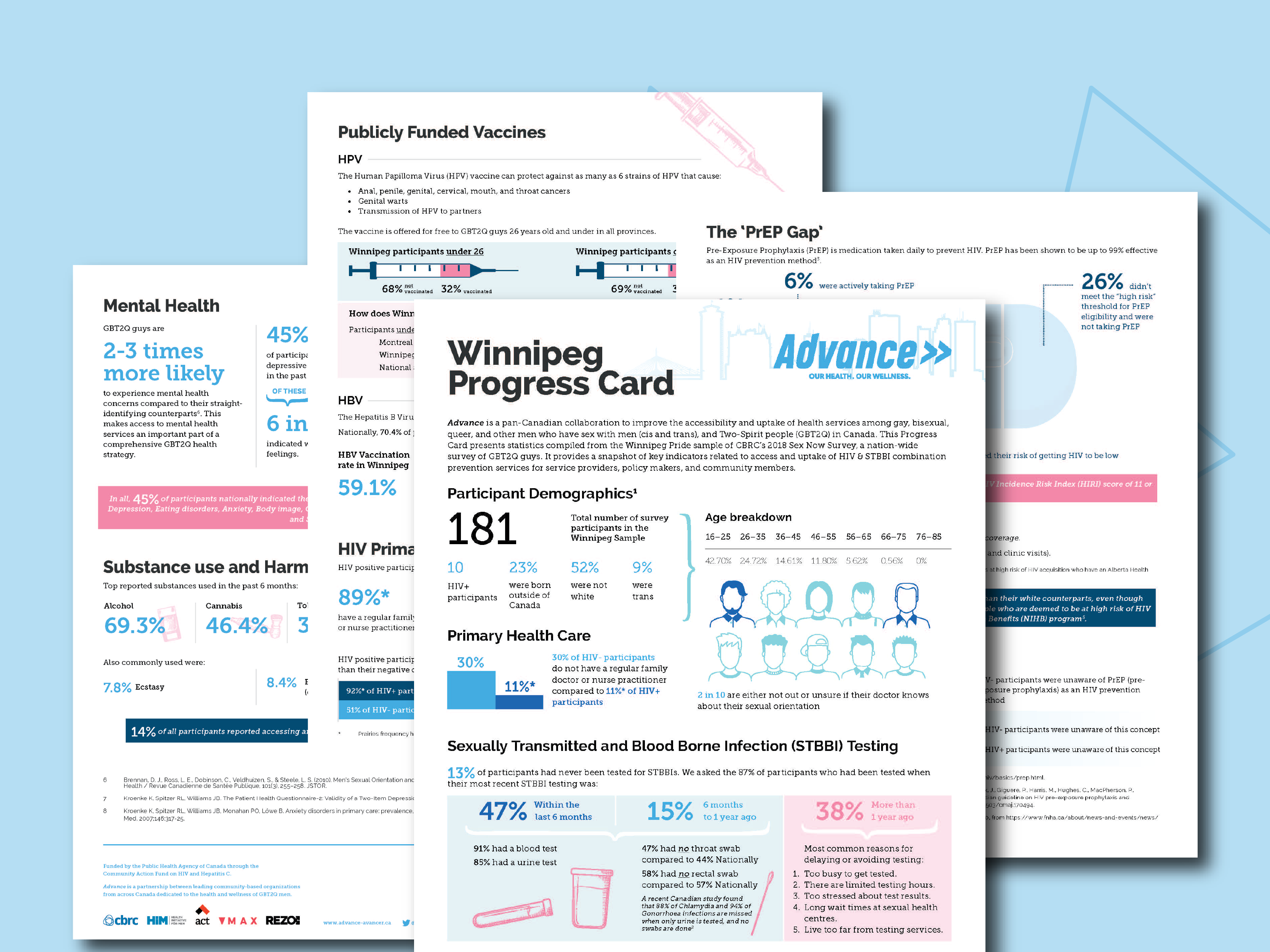 For instance, according to the National Progress Card, only 13 per cent of participants were taking the highly-effective HIV prevention medication, PrEP. In Calgary and Edmonton, however, that figure drops by more than half. Health agencies or community groups in Alberta, then, might be inspired to consider new initiatives that remove barriers for men to understand and access PrEP.

Still, no single finding from any card should be taken as an immediate mandate to change or create local offerings. Put in context, if one city’s Progress Card reveals low uptake of HIV-testing, for instance, that doesn’t by default mean that city’s GBT2Q community is uninterested in testing, or that testing is less available there. Rather, it creates an opportunity for groups to examine why these outcomes exist in their city and ask critical questions about what they could be doing better or differently.

“The stats presented in these Progress Cards are basically the what. From there, we hope this stimulates more local discussions around answering the why – that’s where the real change will happen.”

The Progress Cards for nine Canadian cities are now available to download below: