As shown in recent Sex Now Survey findings, as many as 47,000 sexual minority men in Canada have experienced conversion therapy, with thousands more facing other sexual orientation and gender identity or expression change efforts (SOGIECE).

To help inform Canadians on this important issue, we’re releasing a new report, Ending Efforts to Change Sexual Orientation, Gender Identity & Gender Expression. The report explores the dangers of conversion and change efforts, highlights how to better support survivors, and makes clear that every level of government has a role to play in ending conversion therapy and other forms of SOGIECE. 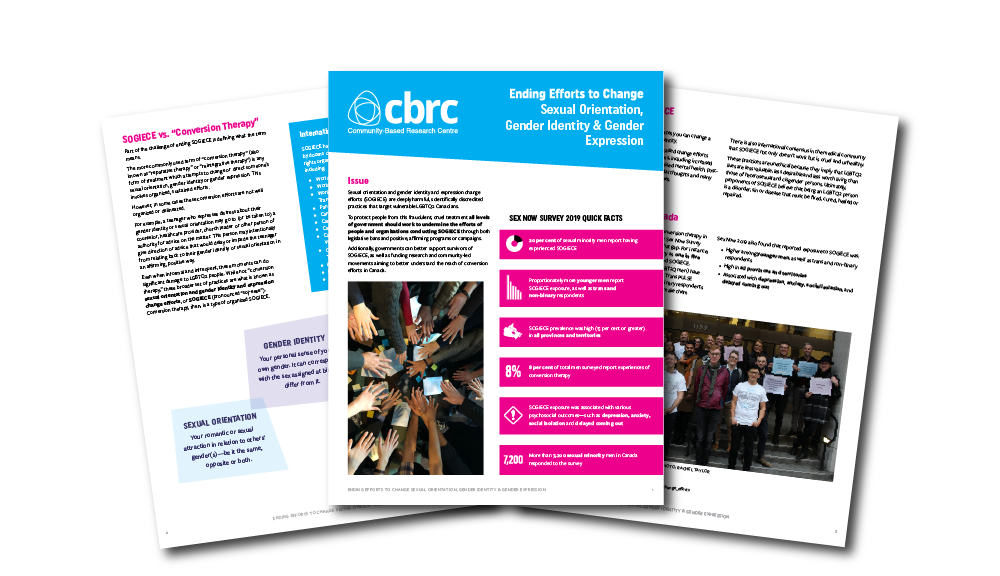 In line with this work, CBRC was invited to be present as the Government of Canada released legislation to criminalize conversion therapy across the country. We appreciate the government’s continued engagement with advocates and survivors, and applaud them for taking swift action on their campaign promise. The legislation shows a lot of promise – especially in deterring practitioners of conversion therapy among minors and criminalizing the promotion of and profiting from conversion therapy.

However, like always, there is room for improvement. We must ensure LGBT2Q people in Canada are effectively protected and supported, even when “conversion therapy” is being disguised as something else. As such, we will ask the government to strengthen the definition of “conversion therapy” in their legislation, and advocate that they also dedicate funding to survivor supports, education campaigns, and research initiatives that help us understand where interventions are most needed.

Our thanks go to the survivors, advocates, and researchers who’ve worked with us to prepare this SOGIECE report. The tabling of Bill C-8 is an important step in allowing all people in Canada to live freely and honestly – but it is not the final step. The work continues.