Yes it’s 2019, but stigma and discrimination against sexual and gender minorities are still common

The results are in, and to no one’s surprise, stigma and discrimination continue to hurt us.

This International Day Against Homophobia, Transphobia, and Biphobia (IDAHOT), CBRC is reflecting on the latest Sex Now survey findings, including that 22% of gay, bi, trans, Two-Spirit, and queer people in Canada reported discrimination due to their sexual orientation in the past year.

At first glance, this may not seem like a huge number but actually represents tens of thousands of Canadians in our communities. Our data lines up with other research that show many of us still face discrimination due to being a sexual and/or gender minority, and that these experiences can have damaging impacts on our health and wellbeing.

Digging a little deeper, we also see that some of us experience even greater levels of stigma and associated harms due to having additional minority identities (e.g. such as being Two-Spirit, racialized, or trans). For example, while 25% of all participants wanted help with anxiety and depression, that number increases to a third of bi guys and nearly half of trans participants. Similarly, while 7% of the total sample wanted help with suicidal thoughts, these rates increase substantially among bi guys (15%) and trans respondents (21%). This is yet another reminder of the urgent need to address the serious health and social inequalities that persist within our diverse communities.

Shifting cultural values, as well as laws banning hate speech, may have made outright acts of homophobia or transphobia less frequent or visible, but anyone who uses social media still knows to be careful of the comment sections. They are constant reminders that homophobic and transphobic hate remains alive and well in Canada, despite becoming less socially acceptable, at least in public. “Brutal Postings,” a 1-minute campaign video for IDAHOT recently released by La Fondation Émergence, a Montreal-based non-profit dedicated to sexual and gender diversity, captures this issue powerfully in a way we can all relate.

In fact, reporting and banning accounts which post hate speech on our social media accounts has now become part of our daily workflow at CBRC, as it has for so many groups addressing homophobia, transphobia, racism, and many other social justice issues. This has become so commonplace that the House of Commons' Justice Committee is currently studying the issue of online hate. As we continue to make progress on stigma and discrimination in physical spaces such as schools and health care settings, we need to ensure our efforts reach the digital environment.

In order to meaningfully address homophobia, transphobia, and biphobia, we need to step up efforts to combat stigma and discrimination at all levels of society, whether that’s in the workplace, on social media and the Internet, in schools or hospitals, or even in the legislature (perhaps especially so!). These efforts must engage Canadians from all walks of life, and with affected individuals and communities leading the way to ensure that their knowledge and experience as stigmatized minorities is central to the response. Whether that’s through comprehensive and inclusive sex education in schools, cultural competency training for healthcare providers, or community empowerment programs to train the next generation of leaders, our toolbox for addressing stigma is expanding. We just need to start using it.

May 17 was selected as the date for International Day Against Homophobia, Transphobia, and Biphobia to commemorate the day in 1990 when the World Health Organization (WHO) removed homosexuality from its list of mental disorders. Much progress has certainly been made in Canada and around the world since then, but there’s still a long way to go – and longer still for members of our communities who are Indigenous or racialized, HIV-positive, trans, or bisexual. But while the purpose of IDAHOT may be to raise awareness of the ongoing impacts of homophobia, transphobia, and biphobia, it’s equally important on this day to recognize the incredible resilience of our friends, partners, lovers, neighbours, and strangers in our communities who overcome stigma and discrimination every day. We see you.

*Michael is CBRC’s Director of Knowledge Exchange and Policy Development and he works out of CBRC’s satellite office in Toronto, ON. 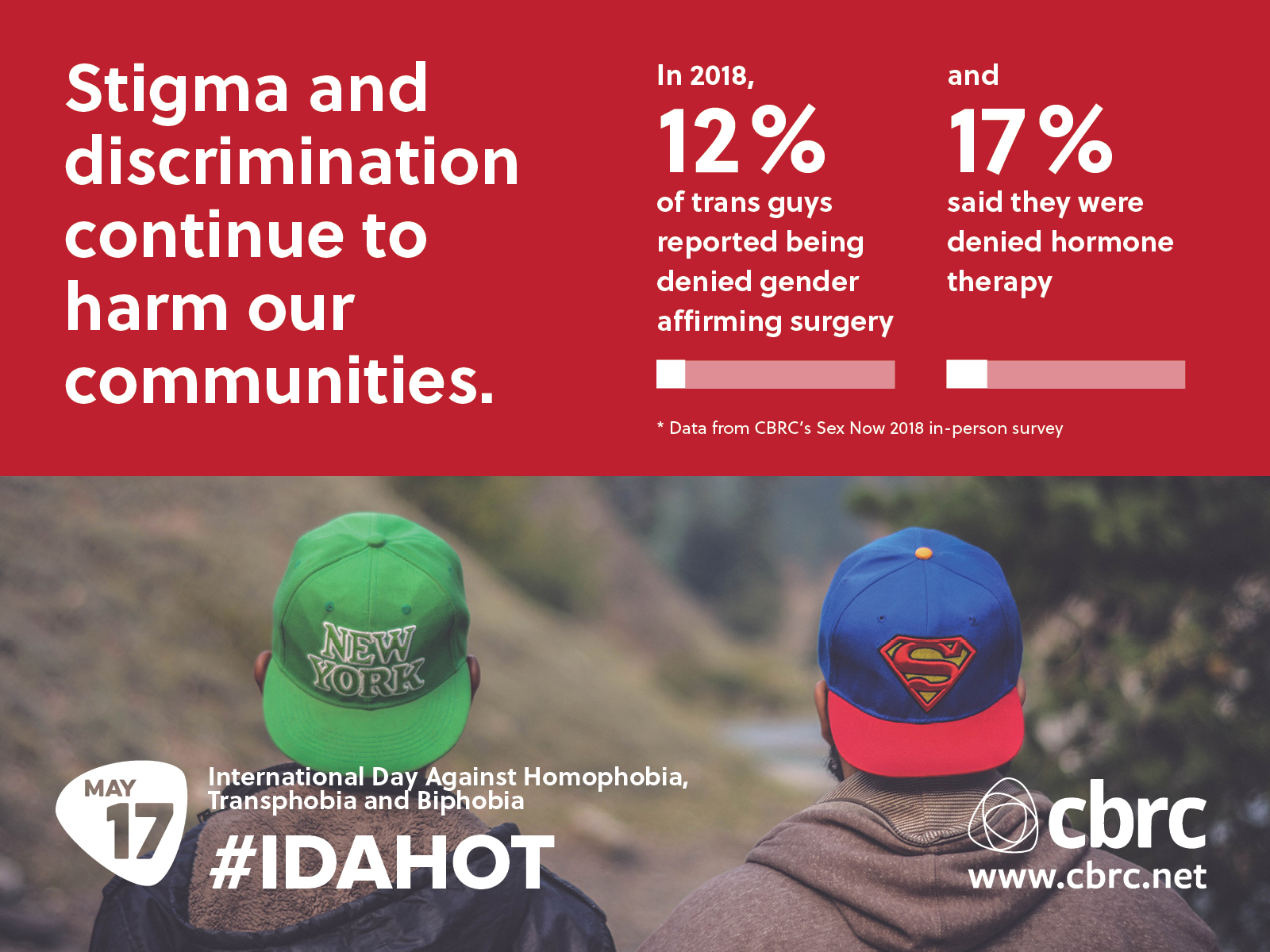 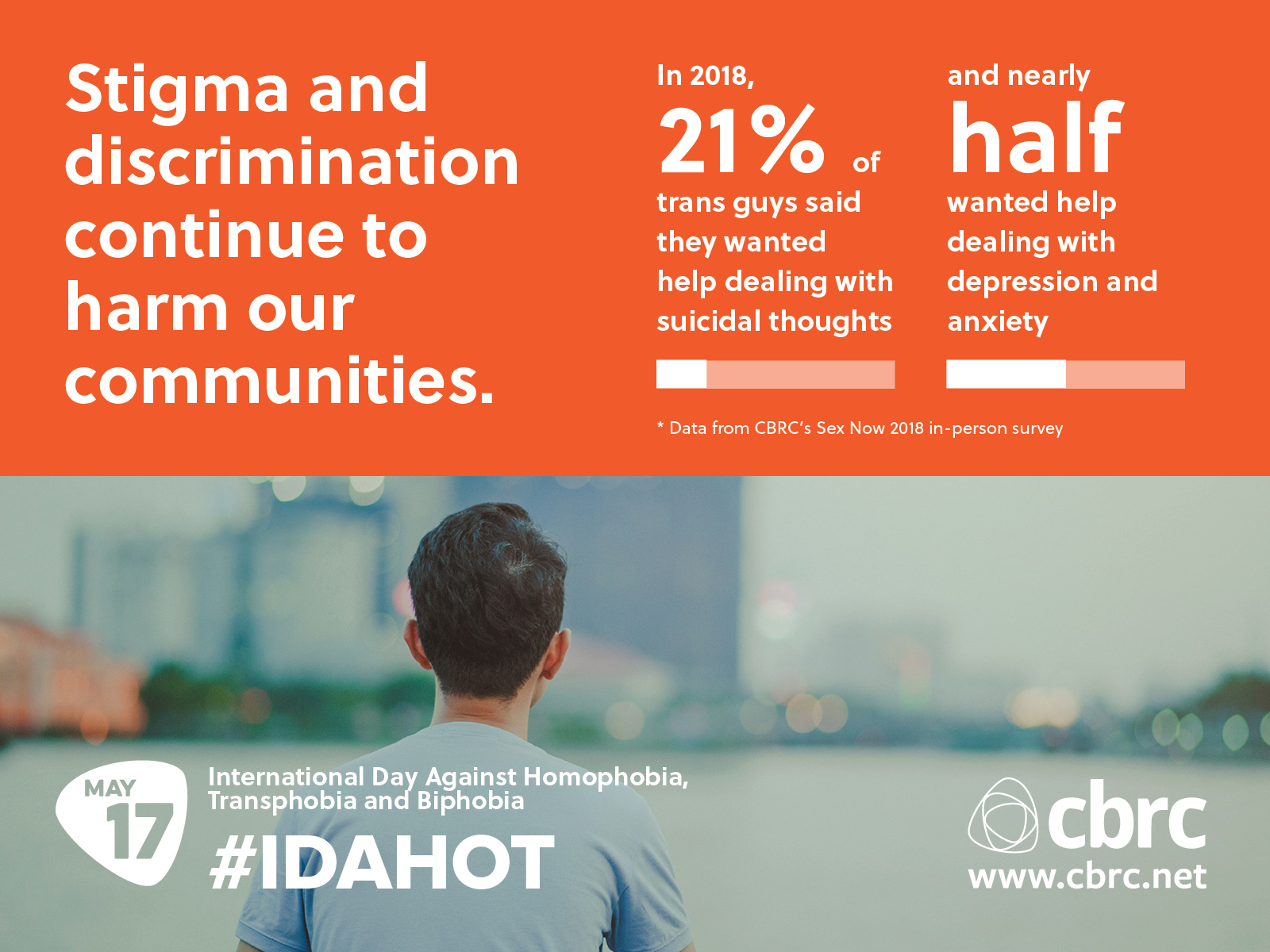 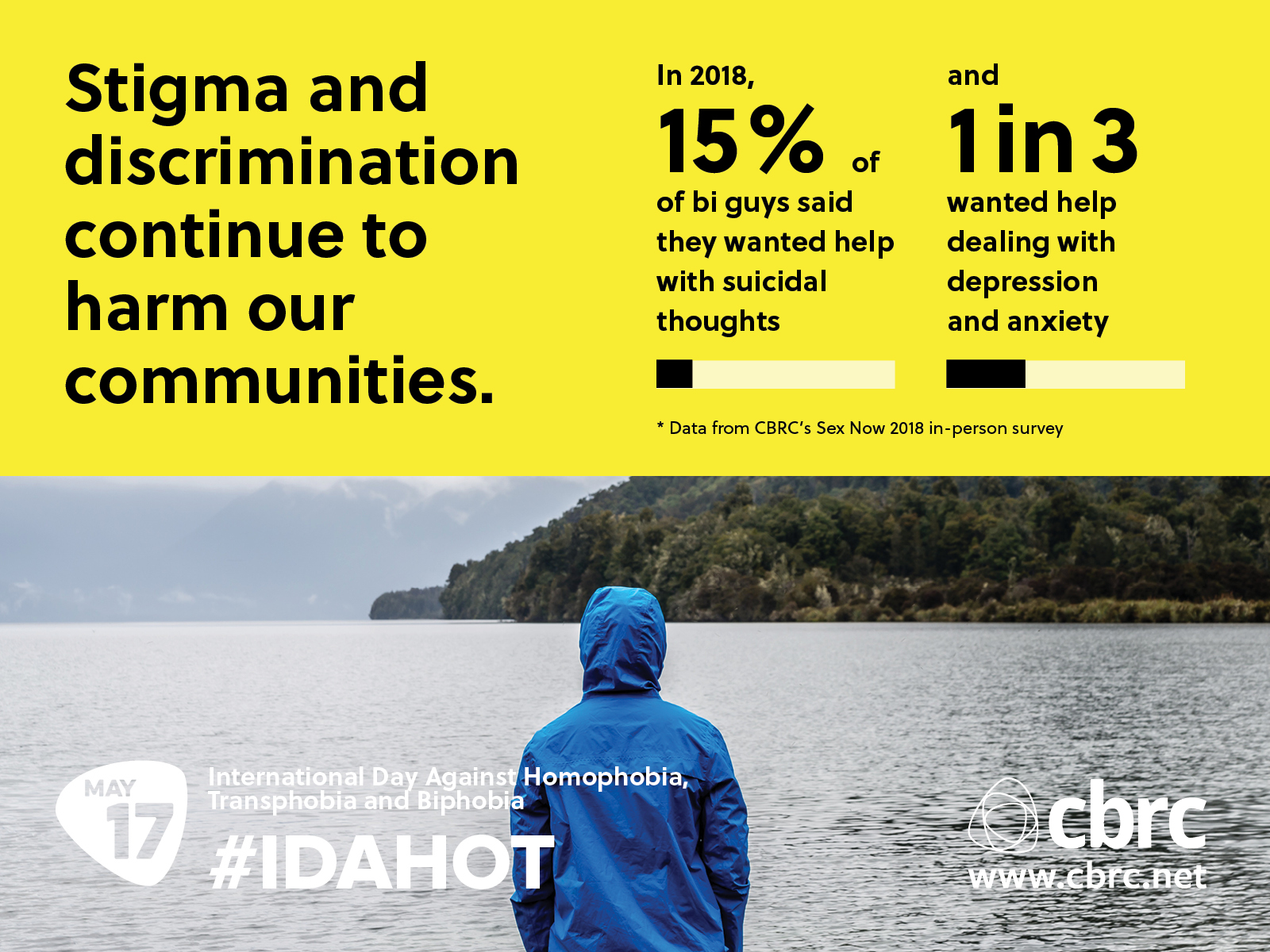 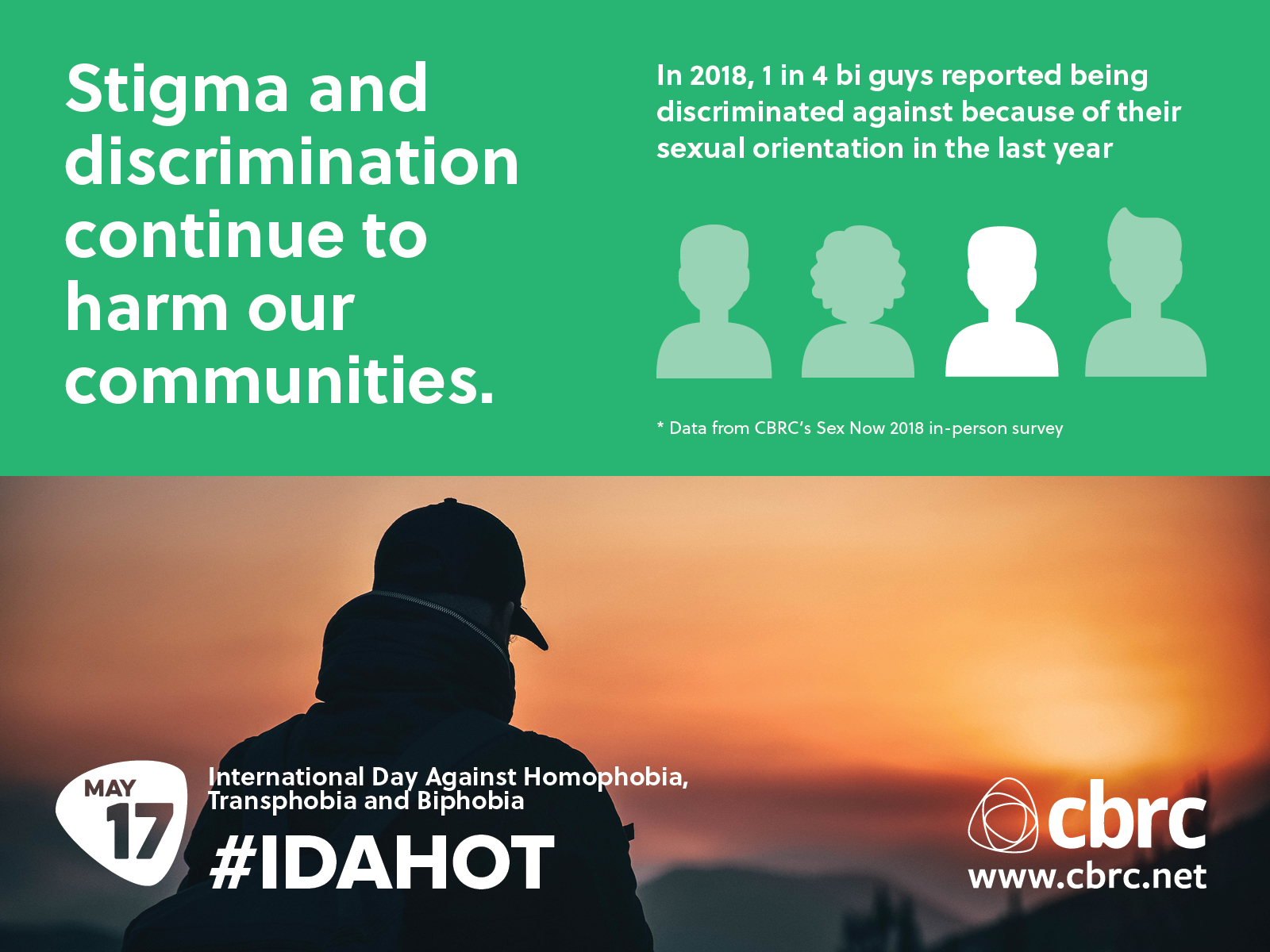 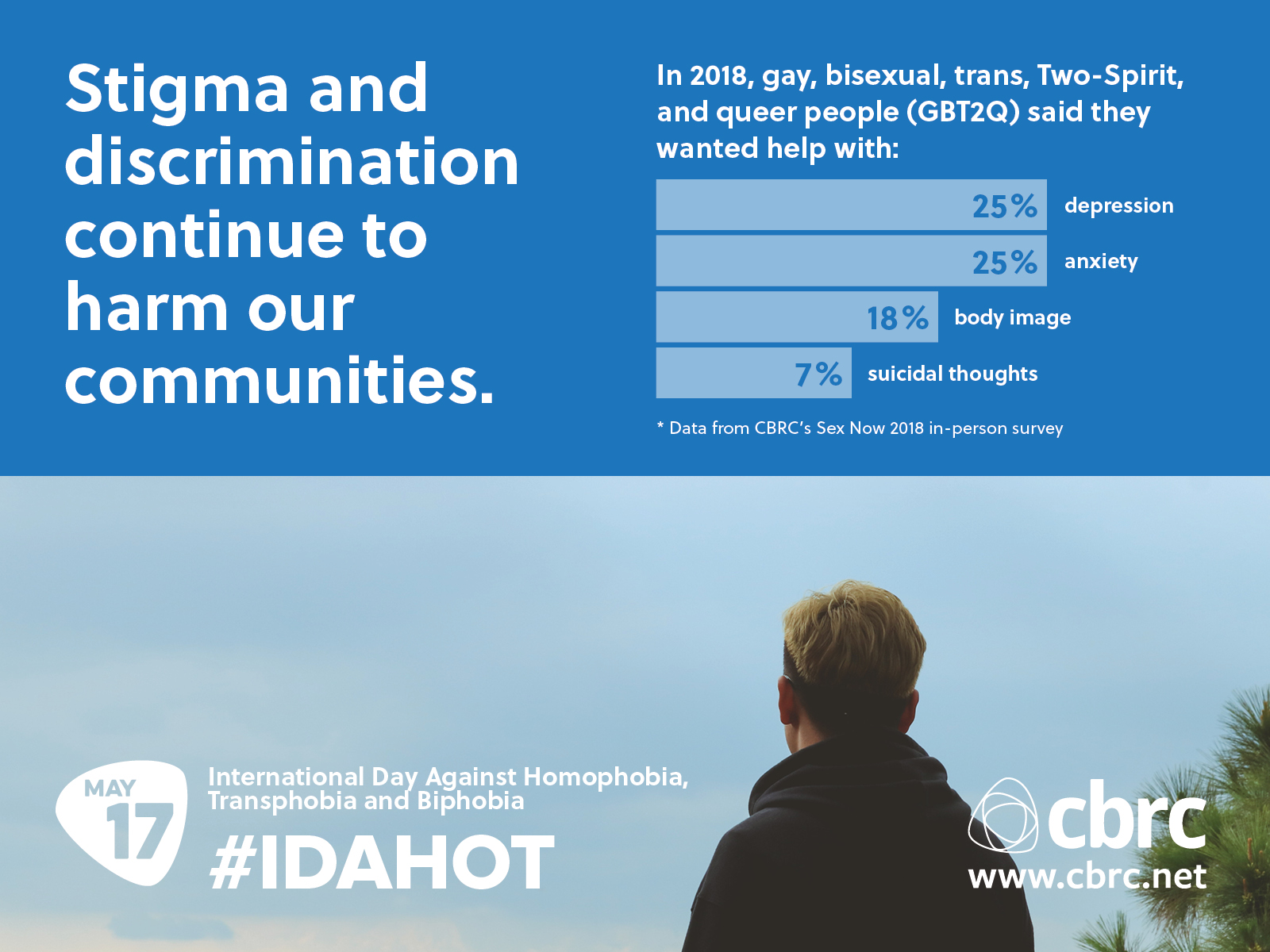 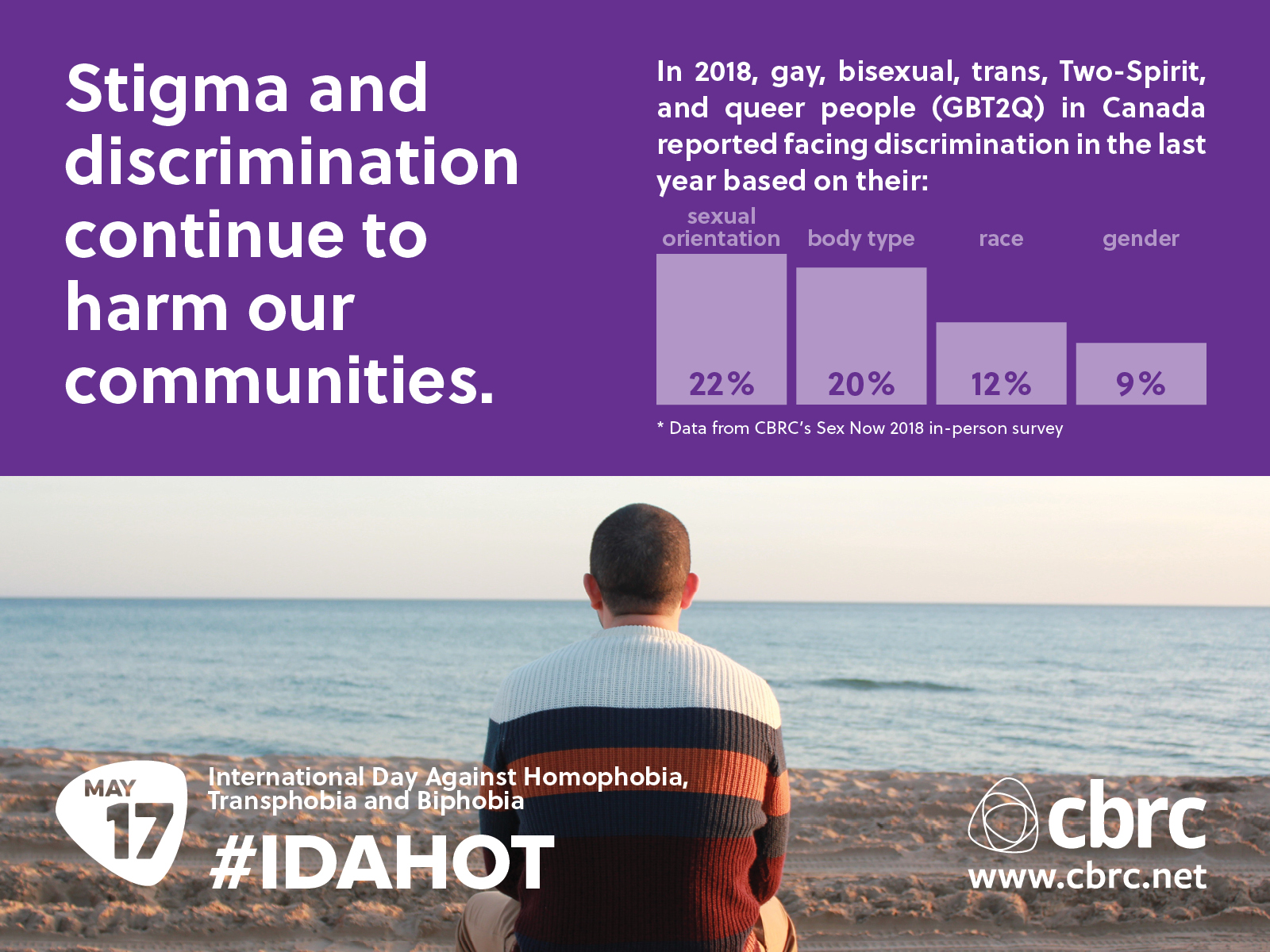