Being someone who has a lot of gay sex, I knew that there was a pretty good chance I’d eventually be exposed to mpox (monkeypox). So, when I heard that the City of Toronto’s vaccination clinics were specifically targeting bathhouse staff and clientele, like so many other folks who are proactive when it comes to their sexual health, I knew I wanted to be in that line.

After details of a clinic appeared on Twitter the morning of June 15, I got in an unbelievably long lineup at the bathhouse, stretching three flights of stairs and almost to the street. Within 15 minutes of queuing up, they let us know they were cutting off the line – 15 people ahead of me – because they wouldn’t have enough doses. I stayed, just in case, and was eventually able to get vaccinated (they had managed to get a few more doses).

Two days later, a Friday, I started feeling really tired at work. I thought I was experiencing a vaccine hangover, sort of like the one from the COVID vaccine, but I was so exhausted I pretty much slept until Monday. On the weekend, I noticed the tiniest little start of a pimple on my butt-cheek. I was hopeful that it wasn’t mpox since I’d just been vaccinated. Still, my muscles were all sore and I had a splitting heading that got so bad I vomited (which has never happened to me before). By Monday it was obvious that the ‘pimple’ was actually my fist ‘pock’ – it had grown and looked like pictures of pox I had seen on-line.

I reached out to the people that I knew I should reach out to, just to give them a heads up. I heard back from one of my lovers, who had also come down with mpox, and it was clear he’d gotten it from me. By the time we talked he was very ill, and had been in bed for 4 days.

Because I’ve worked in the sexual health field for over 15 years, I just happened to know one of the doctors launching the first study on mpox in Toronto, and I was able to get myself and my lover in to see him for confirmatory testing (even though it was obvious we had mpox at that point). Most people don’t have an option like this and have to endure hours at ill-equipped emergency rooms with healthcare staff who know little to nothing about mpox – which is why a lot of people are avoiding getting diagnosed at all, and why reported case counts are doubtlessly higher than what’s being reported.

Some people have zero symptoms and for others it’s terrible. I had it pretty easy compared to my lover, who had pox everywhere—in his urethra, nose, throat, hands, the soles of his feet, torso, on his scalp. Recently, he had one in his eye that was so bad he was starting to lose his vision and was put on the antiviral drug Tecovirimat, also known as TPOXX, to save his eyesight. We were two of the first 40 cases in Toronto. Nobody else we knew had this, nobody knew what to do–and it was just us taking care of each other. If you searched for help on the internet, it was very dismissive. “Take Tylenol. Symptoms are usually mild and resolve within three weeks,” was what we heard. We really were on our own.

This is why I started igotmpox.com. I wanted to share my experiences and those of others after recognizing there was no information about how to care for oneself or to help people emotionally process. I consider it both a love letter to two-spirit folks, and gay, bi, and queer guys, and a how-to guide for all people who get mpox (because some people will get mpox). I made sure to fill it with a lot of sass, campy humour, and real talk, to help folks make decisions, encourage them to be compassionate toward themselves, and get ideas about how to care for themselves.

Since launching the site, I have heard from people around the country who are thankful for the resource and tell me about their mpox journeys. I’ve learned that there’s a lot of lovely, lonely guys navigating mpox all on their own, getting very sick and not really feeling like there are competent healthcare services they can access. One person in Montréal said he’s stopped eating because pooping is too painful. Another couldn’t sleep all night as the pox were so excruciating. A couple had it bad enough they were forced to buy a new mattress. One young guy in Newfoundland is riding it out and avoiding the ER despite concerns of secondary infections in his gums and throat—he doesn’t want to have to deal with what will doubtlessly be a brutal, incompetent and stigmatizing experience.

It was four full weeks before all of my pox had gone through their stages and healed over. It took two more weeks for my lover. I’m pretty sure we’ll both have at least a few small, circle-shaped scars on different parts of our bodies. Getting back into the world and routine of daily life has been a slower and more complicated process than we expected. In many ways, for both of us, it feels like it hasn’t ended – because we know there are more people every day coming down with mpox, many very much alone, and our hearts and thoughts are constantly turning to them.

Sadly, the federal and provincial governments have totally dropped the ball on supporting people who have to isolate for mpox. There’s no CRB (Covid Recovery Benefit), there’s no Canada Worker Lockdown Benefit, no Canada Recovery Sickness Benefit, no rent relief, no eviction protection. There aren’t even many doctors who know the first thing about mpox. There pretty much aren’t any of the things that helped to cushion the blow of COVID for people. We’re sorta on our own. 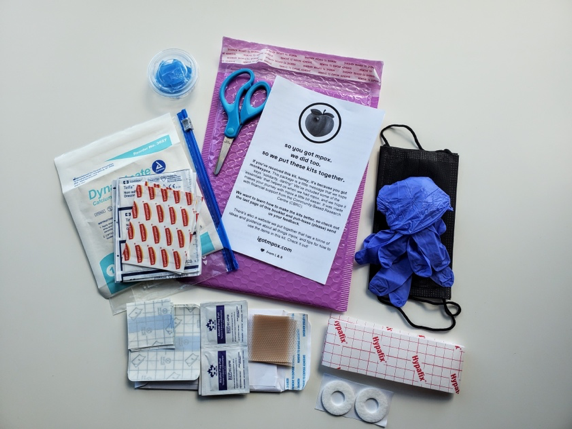 I really want to encourage people to question their medical practitioners and advocate for themselves because of the actions that can be taken, nothing's being done for people with mpox. Through igotmpox.com—which I playfully call an mpoxifesto—we can get the word out about proper pox and wound care and our share experiences to get through this together. It's a big task, but entirely necessary for where we're at right now.