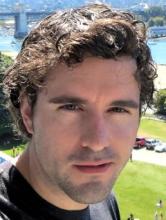 Through research regarding testing, treatment and support as a graduate student.

Qualitative focus in much of my work; I am currently working on mixed-methods longitudinal research with gay men.

4.     What social determinant of health impacts gay men the most, do you think?

It is challenging to disentangle what social determinants “matter most” for gay men given the ways in which (a) social determinants are co-constitutional/inform one another and (b) the fact that gay men are a heterogeneous population and are differentially situated depending on social and structural locations. I am increasingly interested in the roles of heterosexism and income inequity on gay men’s health outcomes.

5.     What's something that everyone interested in gay men's health should read?

No. Does Starbucks count?

This is a challenging question. I am currently conducting research related to the criminalization of HIV non-disclosure in the Canadian context. I am interested in understanding the impact of the recent Supreme Court of Canada decision on (a) testing patterns (e.g., the extent to which a climate of criminalization is a deterrent to being tested) and (b) the reasons why gay men do/do not think HIV non-disclosure should be criminalized.

8.     What is the secret to a perfect relationship?

Patience, honesty, humility and a sense of humour.

9.     How would you describe your current work?

10.  What's the last piece of writing you did on gay health?

I have many gay men that I admire. One in particular is Justice Edwin Cameron (Constitutional Court of South Africa). Justice Cameron was extraordinarily helpful during my doctoral work and I thoroughly recommend his book Witness to AIDS (2005, Tafelberg Publishers).

12.  Where would you like to see gay men's health in five years?

I would like to see the field of gay men’s health research more robustly funded in the Canadian context in and beyond HIV research. I hope that sex-positive policies and programs which support the social, mental, physical and sexual health of gay men are increasingly supported.