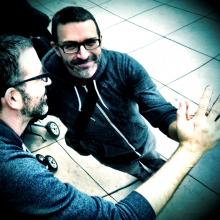 England – but I came to Canada when I was 6 months old.

Quantitative, but some of my best friends are qualitative.

Hands down, stigma related to sexual orientation.  While not everyone necessarily experiences overt discrimination or harassment, we all have to come out and face the possibility of rejection just because we’re gay, and deal with internalized homophobia.  And as Sex Now data shows us, this is not something that necessarily is “getting better” quickly enough.

One of the first things I ever read was “Framing Gay Men’s Health in a Population Health Discourse”, a discussion paper put out by the Gay & Lesbian Health Services of Saskatoon in 2000.  It’s one of the first Canadian reports that I know of to formally articulate a population approach to gay men’s health, and in many ways still relevant today. http://rainbowhealth.ca/documents/english/framing.pdf

Walking into a gay bar in New York realizing that it was full of geeks like me.  (There’s more to the story, but that’s the SFW version).

That’s a terrible scenario – only two questions?   I don’t see a lot of data on how gay men relate to their families, and I think family rejection or acceptance is a pretty important influence on health.  So I would ask: When you were coming out to your family, how did they handle it? How would you describe your relationship to your family now?

My partner (but he’s not available, so everyone else will have to just figure it out for themselves).

Other than saying there’s too much of it?  I lead the provincial surveillance program for HIV, STIs, Hepatitis and tuberculosis, and various testing initiatives. I also lead the development of online sexual health programs at BCCDC.  I also do research related to gay men’s health although sadly I don’t get as much time as I would like for this.

Currently I’m working with my colleague Travis Salway Hottes on a report for the Provincial Health Officer which reviews the current trends in HIV for gay and bisexual men in BC and includes recommendations for renewing HIV prevention.  While specific to HIV we’ve adopted a broader determinants-based approach.  I’m pretty excited about it and it incorporates a lot of different sources of information and input from community and public health stakeholders.  Stay tuned!

I do have a bit of a hero crush on Michael V. Smith, queer writer and artist extraordinaire. I love his books, and the bravery of his films that I’ve seen at the Queer Film Festival over the years are really amazing.  Plus he’s funny, brilliant, and lovely to boot.

I would like to see a more concerted provincial gay men’s health initiative/strategy which has buy-in and support from government and community.  Over the past eight years I’ve been in the field this has been gaining momentum, so fingers crossed.