Suicide prevention with gay and bisexual men: It takes a village. Fortunately, we have one.

Gay and bisexual men are four times more likely to attempt suicide as compared with heterosexual men.  Suicide is preventable, but in order to reach those at risk of suicide, we have to know where to find them.

In the general (mostly heterosexual) population, primary care providers—including family doctors—are key sites for identifying individuals who are at risk of suicide.  Gay and bisexual men, however, have distinct healthcare usage patterns  and many will avoid talking to providers about stigmatized or sensitive topics—including suicide—because of fear of negative reactions to their sexuality.

In this context, we used data from the 2014-15 Sex Now survey to describe healthcare engagement among Canadian gay and bisexual men with recent thoughts of suicide or suicide attempts. 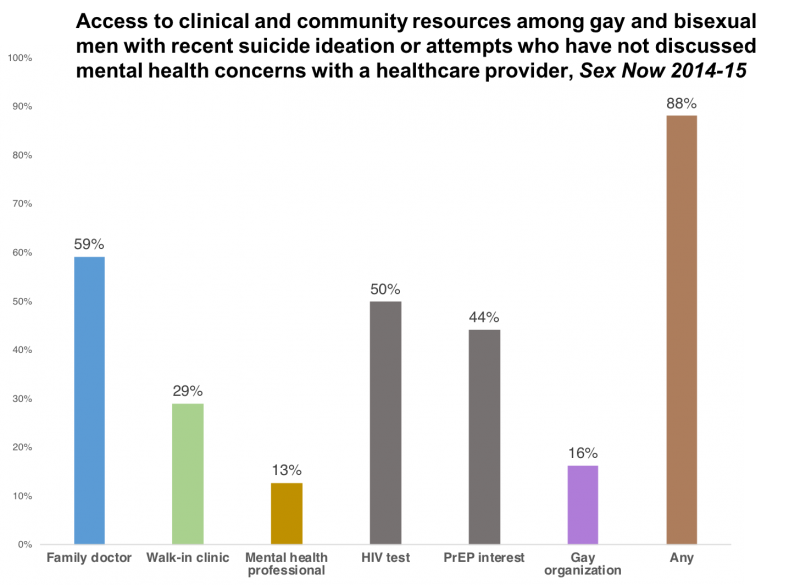 Key findings:
19% of the 7,872 men we surveyed reported thoughts of suicide or suicide attempts in the previous 12 months.

Only 58% of these men had talked to a healthcare provider about suicide or related mental health concerns (i.e., depression, drug or alcohol use).

The following groups were more likely to have talked to a provider:

We found that there wasn’t just one site where we’re likely to reach these men who are at risk of suicide (see Figure below). For example, 59% have a regular family doctor, 50% received an HIV test in the previous year, and 16% volunteer for a gay community organization. Encouragingly, however, 88% accessed at least one of the resources we examined.

What does this mean?:
We think these results make a good case for establishing broad networks or coalitions of clinical and community health providers who may be able to reach gay and bisexual men who are at risk of suicide. These networks should include primary care providers such as family doctors and walk-in clinics, but clearly these sites are not enough, on their own. We also must work with LGBTQ2 community organizations and sexual health clinics (which administer HIV tests and PrEP to large numbers of gay and bisexual men every day), to increase their capacity to identify individuals at risk of suicide and support them in finding ways to keep our community safe.

What can I do?

If you are interested in learning more about suicide prevention in queer and trans communities, there are several ways to get involved.

If you or someone you know is thinking of suicide, there are people who can help support your safety. Call 1-800-SUICIDE or visit https://suicideprevention.ca/Need-Help to find a 24-hour crisis centre near you.

Reference:
This work was published in the American Journal of Orthopsychiatry (© APA 2018). To access a copy of the full report, please contact [email protected].