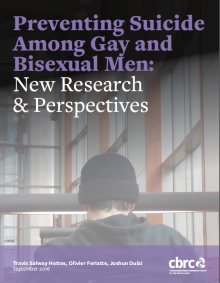 Introduction: New opportunities in understanding and preventing suicide among gay and bisexual Canadians

Suicide is the ninth leading cause of death in Canada, responsible for nearly 4,000 deaths each year (Navaneelan, 2012). While everyone is susceptible to the feelings of hopelessness and despair that precede suicide, for some groups suicide is a more common reality. As one striking example, rates of suicide are five times higher in indigenous communities than in non-indigenous peoples in Canada. Rates are also higher among those who are unemployed or who lack social support—from partners, close friends, or family. A common theme in the societal patterning of suicide is one of social marginalization. People who are excluded or disconnected are more likely to end their lives early.

Given that gay and bisexual men continue to face pervasive sexual stigma (homophobia)—e.g., in Canada gay and bisexual men experience 2.5 times the rate of violent assault as do heterosexuals (Beauchamp, 2008)— it is not surprising that we also have disproportionately high rates of suicide in our communities. Depending on the geographic location (i.e., social context) and other personal attributes (gender, socioeconomic status, etc.) of the persons studied, at least 10%, but as many as 40% of LGBT people will attempt suicide at least once in their lifetime (Hottes, 2015; King et al., 2008; Marshal et al., 2011). Suicide affects gay and bisexual men of all ages, and continues to affect gay and bisexual men today, in spite of important gains in legal protections for sexual minorities in some countries. Suicide thus remains a major cause of death for gay and bisexual men. In 2011, it is estimated that as many Canadian gay and bisexual men died from suicide as died from HIV (Hottes, Ferlatte and Gesink, 2015).