Taking Back the Space: Lessons from CBRC’s First Two-Spirit Gathering

As part of Summit 2021, CBRC presented our first Two-Spirit Day and Gathering to launch our annual conference. While the morning was filled with keynote talks and plenary panels open to everyone, the afternoon was set aside as a dedicated space for Two-Spirit and queer Indigenous folks to gather and discuss the important work currently being done across Turtle Island (Canada).

“It was an overwhelmingly successful gathering,” says Jessy Dame, CBRC’s Two-Spirit Program Manager. More than 70 people took part in the afternoon activities, some joining from as far as the Northwest Territories and Oklahoma. Even though it was virtual, you could feel the electricity in the conversations and see the excitement in people’s faces. And the great thing about it being a space for Two-Spirit folks, is that we didn’t have to waste any time explaining ourselves. We were able to start off on a level playing field and just do the work. It was a very positive and uplifting experience.”

“For some, this was their first Two-Spirit gathering. Everyone brought different perspectives, and that really spoke to the importance of being able to network and participate in each other’s work in a meaningful way.”

Taking place over three hours on Zoom, the Two-Spirit Gathering started off with a traditional land acknowledgement and an opening prayer from Elder Albert McLeod. Presentations were then made on the work currently being done by CBRC’s Two-Spirit Program team, as well as by co-presenters 2 Spirits in Motion Society. Six invited speakers from across Canada then shared their own experiences, representing a cross-section of voices of people working in academia, research, community relations, and HIV. At the end of the day, the virtual floor was open to anyone who wanted to share where they were from and connect with others around the need for resources. “For some, this was their first Two-Spirit gathering,” says Dame. “Everyone brought different perspectives, and that really spoke to the importance of being able to network and participate in each other’s work in a meaningful way.”

One of the main takeaways from the Gathering was the importance of creating more opportunities for Two-Spirit and queer Indigenous folks to connect and communicate without judgment. “It’s amazing how events like this can increase access, not only to one’s peers — but also to resources and services,” says Martin Morberg, CBRC’s Two-Spirit Coordinator. “Even with social media, we’re still dealing with challenges to communication.”

Both Jack Saddleback and jaye simpson’s keynote talks from earlier in the day spoke to the need to support and protect Indigenous youth, which prompted further conversations about the need to create more opportunities to bring youth together. And as participants exchanged contact information and social media handles, there was much support for the idea of creating a central database to connect Two-Spirit and queer Indigenous people to resources and each other.

“Another topic of conversation was tokenism,” says Dame. As Two-Spirit positions increase at non-Indigenous institutions — whether it be within academia, health care or advocacy — there is a desire to make sure these members are supported. “We need to find a way to create networks to ensure that Indigenous folks are thriving in the institutions that employ them, and are not tokenized,” says Dame. “You can’t be the one person at an organization to speak for all Two-Spirit people, it just doesn't work that way.”

Also expressed was the need to bring in a plurality of voices in forums like the Gathering. “It was made clear during the event that we can’t call upon the same heavy-hitters again and again; it can’t be the few Two-Spirit academics we always hear from,” says Dame. “Academics are just as important as community members, and community members are just as important as academics. We need to have all voices coming to light.” 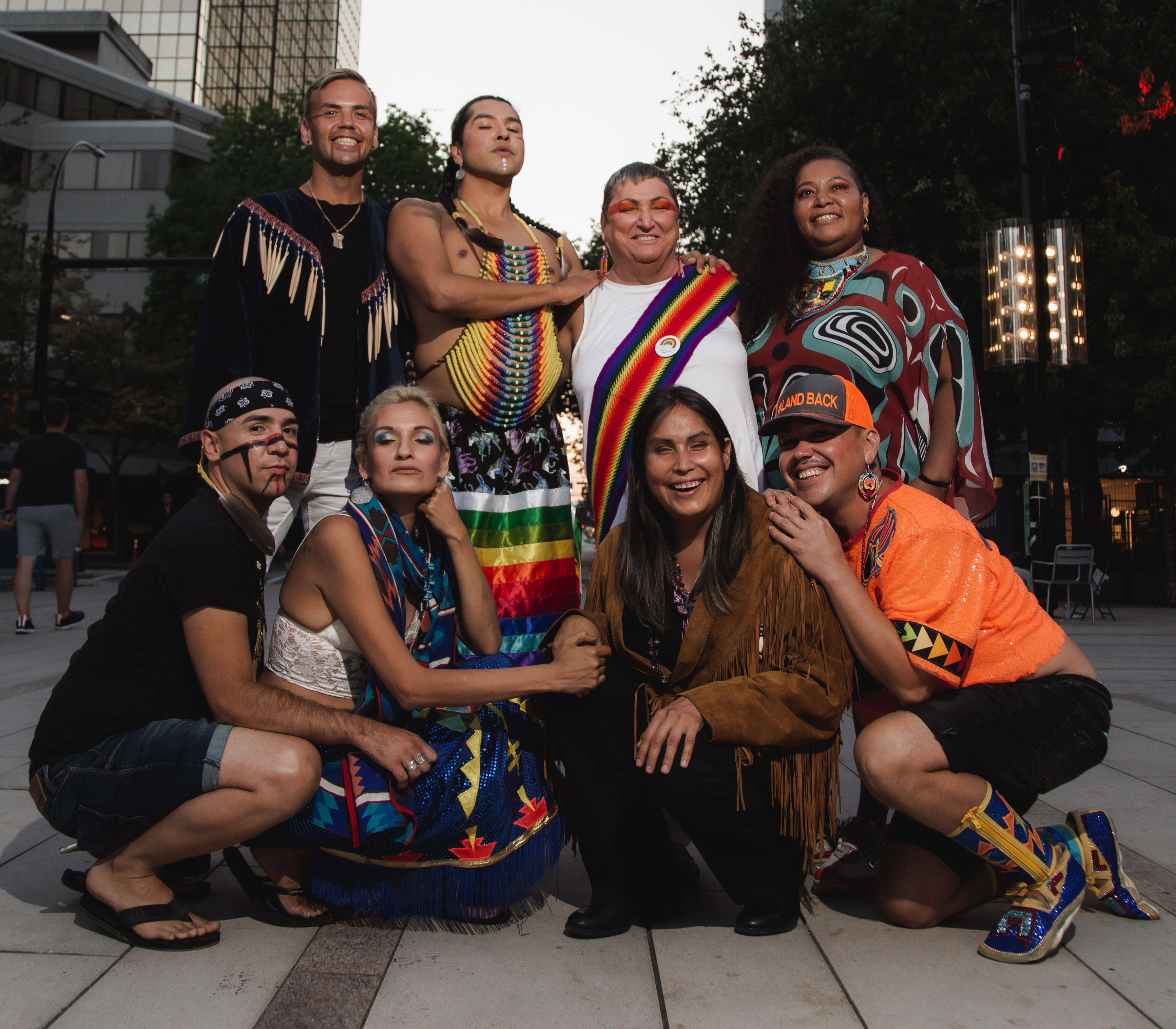 Photo taken at Two-Spirit photoshoot in Vancouver, BC. (2021)

Meaningful engagement with folks living with HIV, and with folks advocating and working within the realm of HIV, was also discussed. Dame and Morberg introduced CBRC’s upcoming Medicine Bundle Project, which will create alternate pathways to testing and sexual health resources for Two-Spirit and queer Indigenous folks living in BC. Containing an HIV self-test kit, Indigenous medicines, and sexual health supplies, the free Medicine Bundle aims to bring sacredness back into sex by providing a holistic approach to sexual health needs.

“We need to challenge the current state of HIV, as well as the isolation that comes with limited access to testing and community networks,” says Dame. “We know that peer navigation and messenger systems work. When we Indigenous folks see ourselves reflected in our systems, it allows for more access, so by having networks and gatherings where we can share our experiences, we can destigmatize care and potentially lead to better awareness of HIV.

Over the course of the afternoon, much was shared and CBRC’s Two-Spirit Team is now consolidating the recommendations into a community report. All information will be shared with those who attended, as well as with Two-Spirit organizations and organizations that support Two-Spirit communities, in the hopes of making lasting change.

“People wanted more events, more spaces to have these conversations,” says Morberg. “Gatherings like this are an act of resistance in themselves as they challenge the extractive colonial framework through a holistic connection and community. Once we establish a feeling of connection, we’re able to get down to the work. There is nothing transactional about these types of Gatherings, which allows us to refuel.”