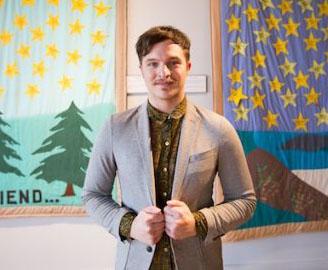 You know it. That feeling you get. When you know you’re the big, pink, fuckin’ unicorn sat at the end of the table. A giant placard hanging from atop your shiny horn: [insert minority]. Maybe you don’t. If so, this drinks to you – literally, I just took a swig from last night’s bottle, just for you. But for many others that feeling is all too familiar. The minority within the minority. The different to the different. I too know that feeling. Although you might not recognize it at first glance, I am not like the others. No, this unicorn, is poz as fuck; like, full-throttle, tiger-blooded, bring me to my people poz.

So, when Resist Stigma – a project targeted at GBQT guys under 30 – was looking for someone to talk about HIV stigma, guess who got the call? Now, I’m not complaining. The lack of young, strong poz voices out there is a problem. And, if they had gotten some HIV-negative guy to write about HIV stigma, I would have gone all “Nothing about us, without us!” on somebody’s ass. But, alas, here we are, several weeks later, and I’m still peering through a stained wine glass, waiting for a group of coherent words to magically appear before me – on a break between working on two other projects that are also linked to my being the poz-est unicorn on this side of the tracks.

My predicament, however, is spurred on by more than just a severe lack of hours in any one day. You see, I’m basically Beyoncé – and humble too, of course. In all seriousness, though, in the same way that the queen of the world herself might not be the most effective choice to speak, from a personal perspective, about the stigma experienced by most women of colour, and Caitlynn Jenner not the best choice if we shift that conversation to the trans community, I too am probably not the best poz guy to talk about HIV stigma – at least not in the way we most often think about the concept.

That’s not because my experience, or the experiences of those two lesser queens, isn’t valid – Beyoncé fans, do not come for me! But my experience as a poz guy is fairly unique. I’m white. I have a grad degree. I work for an HIV organization and run a vibrant grassroots queer men’s health collective. My experience just doesn’t really mirror that of many other poz guys in the community who don’t have a radio interview tomorrow and a TV spot the day after.

The truth is, on a personal level, I’ve only had one really stigmatizing experience related to being HIV-positive. And don’t get me wrong. It was devastating! I’m not a crier; I gave that up after I came out in my last semester of Bible College – push on; fuck the haters; win it all (that’s called resilience, kids). But it took just one boy’s fear, a mother’s uncertainty, and a trip to an emergency room to change that. I was not like the others. This is my body – the only one I have. And that body can drive full-grown men into fits of panic and send chills down a mother’s spine.

That was a while ago. It helped to open my eyes first-hand to the stigma people living with HIV face, allowing me to be a better advocate for my community. But beyond that, the experience has faded and neither the setting nor the characters inspire me much anymore. Hence the post mid-night writer’s block.

Perhaps we should try this from a different angle. I mean, it’s probably not news to you that a lot of poz guys continue to be on the receiving end of stigmatizing experiences within our community, such as social exclusion and sexual rejection. In fact, chances are that some of you have been on the giving end of one of those experiences at some point, whether you recognize it or not. But if we all already get that, maybe we don’t need another sad story. After all, stigma is more than something that is experienced at a personal level, lobbed from one insecure being to another. It is a multi-level construct, impacting all things in all places.

Sounds rather insidious, no? Well, actually, it is.

You see, pretty much everything in my line of work – I work for an HIV org – is connected to ending HIV. Even the funding for projects like Resist Stigma, which aren’t inherently HIV-related projects, are somewhere rooted in the objective of lowering new HIV infections. From local organizations like my own to international groups such as UNAIDS the ambitious vision of “zero” rings loud and true: zero new HIV infections, zero stigma and discrimination, and zero AIDS related deaths. Expand access to PrEP! – so that HIV-negative guys can fuck and not get infected. Treat people living with HIV – so that when they fuck HIV-negative guys, they won’t get infected. Poz prevention! What a marvel!

And here’s where we break apart. We are not the same. For those not living with HIV, HIV can easily be viewed through the lens of public health; a virus – an epidemic – that has far outstayed its welcome and must be stopped. Or perhaps it represents the fear that inconveniently grips you in your times of pleasure. But for me, things are very different.

HIV is as immutable to me as the colour of my skin. Running as deep as my citizenship, it impacts which countries I can visit and for how long. It has sat me in front of people, their eyes mapping out conclusions as to what type of person I am and what sorts of behaviours I must partake in. It ends relationships, often before they even begin. It can send me to jail! HIV is not just a virus to me. That’s insulting. It is at the core of my social and cultural identity.

So, regardless of the good intentions of some of my colleagues out there, we are not HIV equal. And the vision of zero that has been so deeply sewn into our collective psyche is not without its potentially grave implications.

Yet, regardless of this, I am very good at what I do. I have pushed the conversation in my city around queer men’s health and HIV to front page – literally, the front fucking page of newspapers. I have called out the Alberta Minister of Health by name on both television and radio in regards to testing access and the province’s PrEP rollout. There is a grassroots queer men’s health movement developing in this city that is reminiscent of the good ol’ days of early AIDS activism. This work – this progress – combined with the recent advances in treatment, knowledge, and prevention technologies, has brought us closer to ending HIV than we have ever been before. But before we rejoice, we need to pause and reflect for a moment.

For, in what other situation is it anywhere within the farthest boundaries of ethics to ask a social and cultural minority to not only participate in, but lead the decimation of itself – its members marching forward like hens feeding on a chicken nugget? And what does it say of our value, and of those before us, that it is acceptable – desirable even – to live in a future that is void of our experiences, our perspectives, and our contributions? Who has HIV given us? And who, when it leaves us, will it take away?

The honest truth is, increasing access to HIV testing does shit all for me. Nor does PrEP. I’m on the other side of needing the former and have managed to live, love, and lust just fine for the past four years without the latter. That’s for you. And it’s you that I’m here to serve. But just know, this is bigger than public health. It is bigger than your fear. It is death but it is life. And someday, when you have your world free of HIV – and we’re no longer here – take a moment and recognize the cost of your freedom.

In the meantime, though, I’ll be that pink, tiger-blooded, poz unicorn sitting across from you at the table. Enjoy the view while I’m still around.