The Cost of Homophobia: literature review of the impact of homophobia on Canada 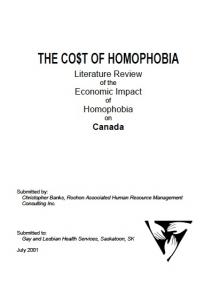 Research was reviewed related to the negative results of homophobia on gays, lesbians and bisexuals (GLB), and the economic impact of such negative effects. Homophobia was defined as the irrational fear of, or aversion to, homosexuals and homosexuality, while the related construct of heterosexism was defined as a belief system that values heterosexuality as superior to and/or more natural than homosexuality, and/or the assumption that all people are heterosexual. The research reviewed showed that GLB and heterosexuals were equivalent in terms of psychological and psychosocial health and functioning, but that GLB had a shorter life expectancy and faced health risks and social problems at a greater rate than the heterosexual population. The reason for these increased problems is the chronic stress placed on GLB resultant from coping with society’s negative responses and stigmatization.