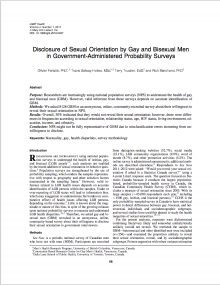 Researchers are increasingly using national population surveys (NPS) to understand the health of gay and bisexual men (GBM). However, valid inference from these surveys depends on accurate identification of GBM.

Researchers are increasingly using national population surveys to understand the health of lesbian, gay, and bisexual (LGB) people1,2; such analyses are enabled by the recent addition of sexual orientation or behavior questions.3 Population surveys are strengthened by the use of probability sampling, which renders the samples representative with respect to geography and other selection factors enumerated in the sampling frame.4 However, valid inference related to LGB health issues depends on accurate identification of LGB persons within the samples. Under or over-reporting of LGB status will lead to information bias, which may exaggerate or underestimate the burden (or comparative effect) of health issues affecting LGB persons, depending on the outcome.5 Little is known about the magnitude or nature of this bias, in spite of the growing reliance upon national probability surveys to measure and understand LGB health disparities.3,6,7 Therefore, we asked gay and bisexual men (GBM) recruited in an anonymous, online, community-based survey about their willingness to disclose their sexual orientation to government interviewers.