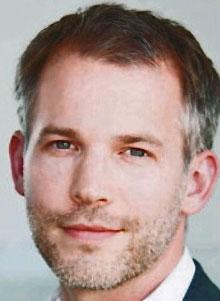 My writing career had two beginnings. First, I started work at the queer paper, where I had fun pumping out stories about queer life on U.B.C.’s campus. It was racy stuff by mainstream standards—complete with graphic depictions of gay sex—but nothing shocking for the readers of Xtra. The second beginning, though, came a year later when I began writing weekly reviews for a major daily paper. These two career tracks ran in tandem for a couple years without one world much bothering the other. Occasionally my editor at the big daily would read something I’d written in Xtra and give me an ironic headshake, but that was about the extent of the crossover. I got to thinking I lived in a pretty permissive world; or at least an oblivious one, and that was just as good.

That was all dashed, though, when one of the staff writers at the daily posted one of my sexy “gay rag” stories up on a bulletin board. I’m told the journalist then wrote, “Is This Our Michael Harris?” across my smutty story. Once it became known that I was gay—and that my editor was gay, too—rumours began circulating that I was too young to have such a prominent position, that surely there’d been some funny business since my editor and I were a couple of homos. Soon I received a phone-call informing me my services were no longer required. I still remember taking that call: I was sitting on my futon in a basement suite, actually working on a review, when two-thirds of my income was wiped away. I’d been writing for that paper on a weekly basis for two years. By way of apology, my editor sent a bouquet of flowers, but they were mailed to the wrong address. 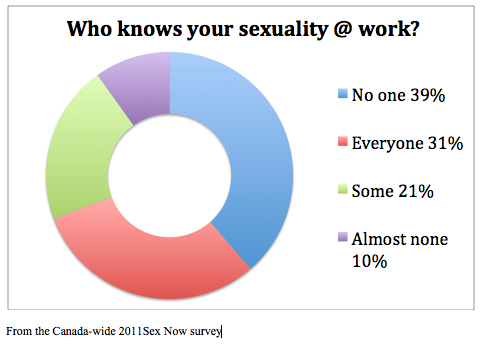 My story, it turns out, is far from singular. To this day in Canada—despite all the civil liberties granted to queer citizens—many of us have our careers damaged (obviously or insidiously) by discriminatory attitudes. Yet we’ve become strangely complacent with the level of “tolerance” we receive. An Angus Reid poll taken last year found that most of us (93%) call our workplaces “tolerant” even while a third of gay men and 40% of lesbians have experienced discrimination at work. How do these two numbers square away?

When we encounter discrimination at work—which usually comes in the form of exclusion (43%) and ridicule (42%)—what’s our most common response? That Angus Reid poll found we usually say nothing. For many of us, ridicule and exclusion might be non-factors, though, because we haven’t even come out to our coworkers. Among gay men, only 71% are out to their peers at work. Shockingly, that number drops to only 23% among bisexual men. (Perhaps because a bisexual man is more likely to have experiences that would allow him to “pass” as heterosexual.)

Many rationalize this silence by saying their private lives are their own and have nothing to do with their work lives, etc. That sort of reasoning, of course, gets you about as far as the water cooler. Almost no job is devoid of socializing, of Christmas parties with husbands and wives, of friendly joshing about weekend activities.

The workplace is an entrenched bastion of masculinity; despite the fluorescent lighting and soul-crushing elements, it’s hardly a sexually neutral terrain. And it turns out that those with positions of greater authority are far less likely to expose that authority to the vulnerable glare of perceived “queerness.” One study found that the higher a gay man’s income is, the less likely he is to be out at work. Is this merely attributable to the comfort levels of an elderly demographic? Or isn’t it also likely that those who are highly aggressive, who succeed in a corporate environment, have “more to lose” and are willing to stay in the closet to secure masculine privilege and its attendant job safety. It’s telling that the people at work whom gay men are least likely to come out to are not their bosses but their subordinates. Only 55% of us will tell those working under us that we are gay—it seems likely this is a strategy to maintain authority by protecting “compromising” information.

And we have more to lose than just a fat pay-cheque. Michael Marmott’s “Whitehall Study,” a pioneering work in the field of social determinants, concluded that distinctions of status at work can either positively or negatively impact one’s physical health. Higher status people—for myriad but connected reasons—simply enjoy better health.

Vancouver’s Community Based Research Centre applies a social determinants approach to its annual Sex Now survey, leading to particularly interesting findings regarding young gay men and their attitudes toward the workplace. Most, like me as a young reporter for that daily newspaper, presume that it’s okay to be out at work and don’t expect to get dinged for being honest and open. “The workplace,” noted one Sex Now report, “appears to be a site of an inevitable clash of values, particularly among gay men expecting to be out in the workplace without recrimination.” In fact, research shows that a full quarter of those who disclose their sexuality in the workplace will experience discrimination, compared to only 9% for those who do not disclose. There’s a certain naivety, then, in the younger generation’s position. But then, if everyone knew what they were in for, perhaps no progress would be made.