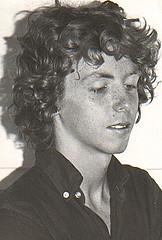 As a 16 year old in 1969 what I mainly remember is being obsessed with a particular boy. I took no notice of the historic events like Stonewall, or just months before, the decriminalization of homosexual acts in Canada’s criminal code. The landscape as I saw it in a small Kawartha Lakes town, there were no homosexuals around and as a gay person I simply did not exist.

Then there were the 1970s and everything changed. The nascent growth of a gay sensibility, that same-sex love was healthy and natural. To be part of the change thousands of us would move to a big city. With tentative steps, and episodic confrontations, we became creators of gay gathering places, community organizations. Our own bookstores and media. In Toronto, where I now lived on and off, I was able to visit Glad Day bookstore’s first location in the hallway of a tall, dark house in Cabbagetown. Buying the Body Politic became a ritual. And not to omit visits to the Manatee Disco.

In 1976 my second-story windows on King Street West overlooked Farb's car wash, and not much else. Under $200 a month for a two-bedroom apartment. Surrounding buildings were vacant. I remember hanging out a window with a glass of wine, an errant group of suburbanites looking up from below: their looks of disgust—that someone lived there. Their imagination was limited, but so was mine. Who would’ve thought that the same windows would one day directly face the entrance of the TIFF Bell Lightbox, the hub of the theatre district, restaurants galore.

A lot else would also have been beyond my imagination back then: gay marriage, gay film festivals, open gay TV stars, million plus pride parades. I went to the biggest gay community event of the summer, a dance on the second floor of the Church Street Community Centre: a hundred people at most, some awkward dancing to Elton John and a folksy table laid with carrot sticks and Ritz crackers. The boyfriend that I had dumped months before showed up and informed me that he had bought a house in the Beaches for $40,000—I thought he paid too much. All in all Toronto depressed me. Time to find another big city.

1977 found me in a place I loved: French doors and a balcony in Montreal's McGill ghetto. All the beautiful Montreal men. A film course with an openly gay professor, Thomas Waugh. Paradise I thought. I was unprepared for the October early morning phone call from my current bed-mate. He was in prison, one of 145 arrested in the infamous Trux raid; police had stormed the gay bar armed with machine guns. Things quickly unfolded from there, 1,000 demonstrators downtown. Two months later Quebec became the first Canadian province to give human rights protection to gays.

Yes, I was in a good place. Walking distance to the bars—all those Montreal men. And five years passed. One evening I was playing monopoly with three other gay men. One of them was particularly aggressive. He wanted it all and he got it all: rue Ave. du Parc, Boardwalk. But he coughed frequently, had been strangely sick for weeks. Nobody was able to figure it out—or if they had, dared to admit that mysterious “gay cancer” had come up from San Francisco to spoil the fun.

How quickly the stage was set. In the 1980’s AIDS settled upon my generation, even more so with the gay men just a few years younger. Utter devastation for hundreds of thousands; and evident from the very start, the stigma when sex and death go together. The denial and blame. Turn on the TV in the 1980s and you would get the close-lipped (but still smiling) Ronald Reagan, the bizarre antics of tele-evangelists. The finger pointing. I remember being on a Cape Cod whale watch, another passenger being observed: “He has it!” Visitors to the Castro District likened the gay scene to a concentration camp.

Our gay vocabulary of celebration became one of war metaphors: those doing battle with MAI, Toxoplasmosis, Kaposi Sarcoma. And then the warrior drugs like AZT. “… bodies attacked from every side… like watching a friend being machine-gunned.”[1]

Gay communities rallied and AIDS service organizations became institutionalized. Beside our bookshelf copies of the The Joy of Gay Sex we added Paul Monette’s Borrowed Time and Larry Kramer’s The Normal Heart.

Then another book, Randy Shilt’s And the Band Played On. I was on staff at Montreal’s 1989 Vth International AIDS conference, had a front row view of the media brouhaha surrounding Shilt’s book: his story of the hour, Patient Zero, the idea that Gaetan Dugas, a gay flight attendant had spread AIDS to North America. All to do with gay blame and stigmatization and nothing to do with good science.

In the early 1990s I was working in the AIDS Vancouver education department. In HIV prevention for Gay Men validating the community was imperative, being sex-positive a huge part of it. It was mostly all about condoms then, a new class of antiviral drugs not yet on the scene; notions like manageable disease and the nuances of undetectable viral load still years away.

A generation middle-aged and older that has seen it all. Some HIV-positive men who were told by their doctors thirty years ago that they had six or twelve months to live, now hear “almost-normal” life expectancy. It’s not all good, there are the side effects of medications and mental health issues: depression, anxiety, self-esteem.

Add to that survivor guilt and long term grieving. A columnist in the late 1980s wrote a tribute to a dead friend. Again redolent of war metaphors she romanticized HIV, saying that it was taking the most beautiful, the most creative of a generation.

The name of the boyfriend (with the Beaches house) who I gave up back in 1976 is on the AIDS memorial beside the Church Street Community Centre. The names of at least two other former boyfriends are also there. So many of our generation. But we have also thrived; resilience, articulation and honesty have allowed us to survive as individuals and community.

And here we are. Becoming senior citizens. Like all older Canadians, facing possibilities of isolation, lack of mobility, loss of partners. End-of-life preparations, all that. At a recent Town Hall Meeting, Fostering End of Life Conversations, Care and Community among LGBT (sponsored by SFU Gerontology Research Centre) we heard stories of gay seniors being told, of course you will be welcome in senior residences—so long as you keep quiet about it, the GAY thing. The HIV thing, if that is the case. Be invisible. The first AIDS generation, one that does not exist?