In the Palm of Your Hand: Sexual Health Literacy 2.0 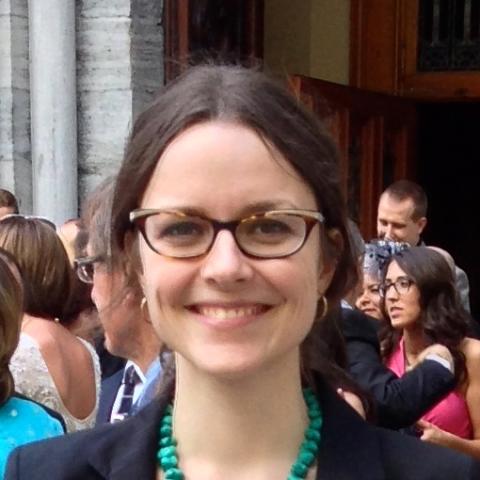 Participants attending the 10th Gay Men’s Health Summit spent two days discussing health literacy in areas such as sexual health, mental health, and cancer. Assessing and enhancing the health literacy of gay men, providers, and organizations was a common theme. Of chief concern was the impact of new technologies on gay men’s sexual health: How should we change the way we talk about HIV in light of the shifting landscape of prevention and care? What role does emerging digital technologies play? These were two questions I had in mind as I listened and observed.

Increased emphasis on biomedical technologies in HIV prevention requires us to think carefully about how we communicate risk. Both CATIE’s James Wilton and Concordia’s Mark Gaspar discussed risk as contextual, and identified risk information as playing only one role in shaping sexual decision-making. CATIE’s Len Tooley offered his framework to help providers give more accurate and inclusive messages to their clients. Prompting a lively discussion in the room, it soon became clear that our collective understandings of risk are not only about what “science says”. They are also subjective and highly variable. The challenge for providers and organizations, then, is to be able critically assess and translate scientific information for gay men that also resonates with their lived experiences.

To do so, we also need to pay attention to how gay men make sense of their biomedical and social realities. AIDS Vancouver’s Brent Sawlor presented The New Face of HIV campaign, an initiative designed to raise awareness about viral load suppression and promote undetectability as a new serostatus (1). Presentations about PrEP awareness by Glasgow’s Ingrid Young, OHTN’s Barry Adam and CATIE’s Ed Jackson found low awareness, varying levels of literacy, and general ambivalence about it as an HIV prevention strategy. This suggests that health literacy is more than about simply sending messages and assuming that people simply “get it”; we must also pay close attention to how gay men understand scientific information and enact it.

One place where this can happen is the Internet. Matt Taylor and the HUSTLE team presented an evaluation from their Netreach program, identifying it as an important venue to support the needs of male sex workers and vulnerable youth. Nathan Lachowsky presented Ontario data from the Cruising Counts survey, suggesting that 50% of men reported feeling satisfied by the sexual health information they found online.

Data from the 2011 Sex Now Survey confirms this (2). The Internet is not only a popular venue for sex-seeking (nearly 90%), but is also where many seek sexual health information. Nationally, 65% of men reported doing so, with rates highest in BC (68%) and lowest in the Territories (48%). 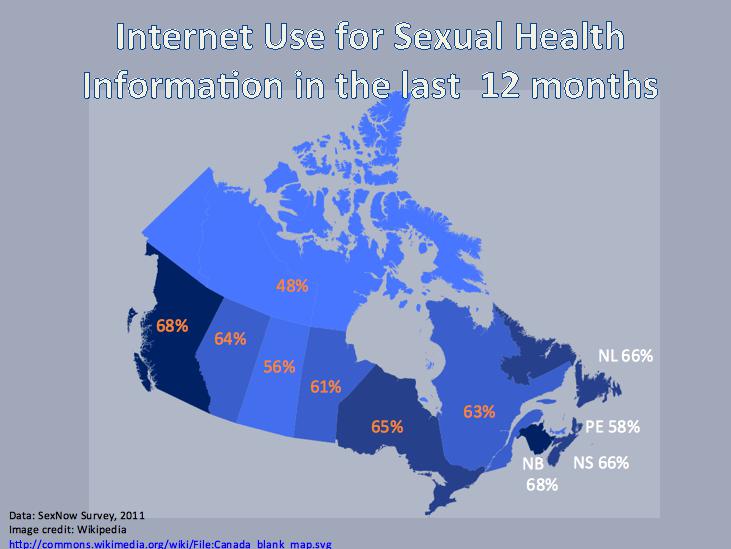 Results also suggest that the Internet remains an urban-centric and youth-driven phenomenon. Nationally, 66% of urban gay men reported using the Internet for sexual health information, compared to 60% of men in rural settings. 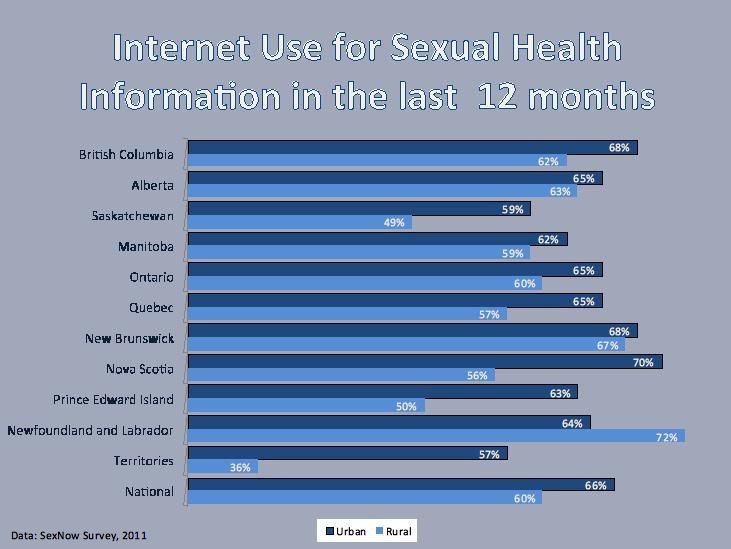 Looking up sexual health information also varies depending on age, with 75% of young gay men and 62% of gay men over the age of 30 reporting this activity. 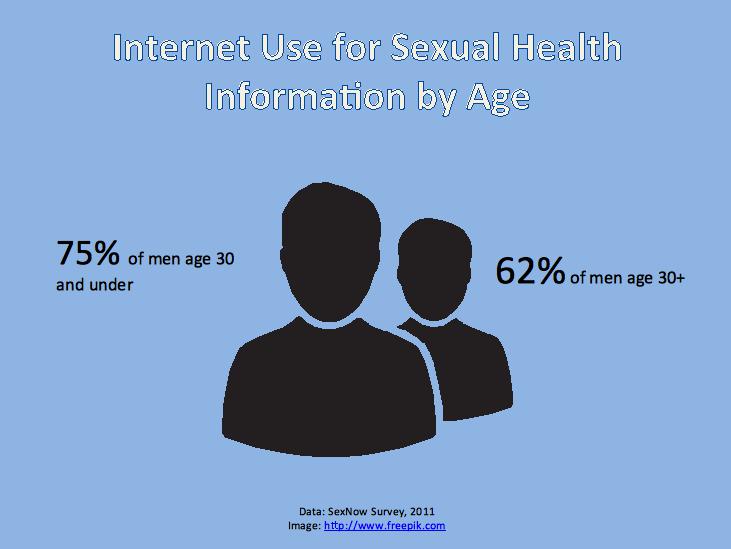 The question is, what are they learning? (see my previous post as a health literacy refresher). Data from the 2010 and 2011 Sex Now surveys suggest that while most gay men demonstrated high levels of basic or functional literacy regarding HIV risk and prevention, levels of interactive or critical literacies could be better supported (3). From a functional perspective, 65% of respondents knew that ARVs can suppress viral load, and 80% knew that bottoms face a higher risk of HIV acquisition.

Fewer gay men in the sample demonstrated interactive literacies, the kind relevant for empowering individuals to take control over their sexual health. Less than a third were aware of HIV prevalence among the community. Less than half were aware of advances such as rapid and early HIV tests. 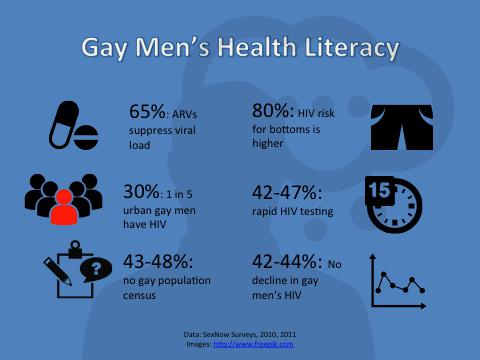 Findings also suggest lower levels of critical awareness regarding the political issues that shape gay men’s health. Less than half were aware that there is no population census data for sexual minorities, that gay men are underrepresented in health policy, and that the epidemic among the community has not significantly declined. While information appears to be perpetually at the tips of our fingers and in the palms of our hands, how is it that our understanding of ourselves and our health as political and tangible remains out of our reach?

If there is one takeaway from all of this it is that both technologies and health literacy reveal things that we already know. Biomedical innovations, whether in the form of PrEP, ARVs, or advances in HIV testing, offer us a sense of certainty and autonomy in a world where things can feel up in the air and beyond our sense of control. Scientifically speaking, a “pill a day (may) keep HIV away”, but the social reality is that it requires much more than that. Health literacy in this case tells us that the success of testing and treatment depends on interpersonal, social, and political modes of support from providers, communities, and public institutions.

We also know that the hopes and promises attached to the Internet as a “great equalizer” come from a world of persistent inequity and discrimination. As I’ve suggested previously, health literacy brings us back to the social determinants of health. Age and geography, for example, influence how we seek sexual health information online. That Internet health literacy also depends on education and income suggests that the online/offline divide is not nearly as distinct as we’d once imagined.

However, focusing on the intersections between health literacy and the Internet also provides opportunities to enhance the work we do. The Internet offers us a firsthand view of how people with varying levels of HIV literacy create meaning, debate scientific evidence, react to new biomedical developments, and learn together. In turn, we learn about what people know while also learning what people think they know.

The Internet also provides alternative ways for people to engage with sexual health messaging. Web videos from organizations like the Health Initiative for Men, for example, provide informal kinds of education that start with the lives and experiences of gay men themselves (4). The rise of online campaigns addressing social determinants like HIV stigma are also promising, with Living Positive Victoria’s E.N.U.F. campaign and the Los Angeles-based Stigma project as examples (5,6). These interactive and participatory modes can help support the various kinds of literacies required to support the health and well-being of gay men.