Intersectionality and Gay Men’s Health and interview with Olivier Ferlatte 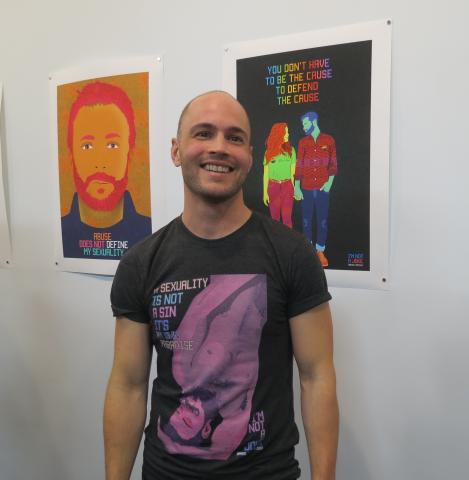 Olivier Ferlatte is the Director of the Resist Stigma project at the CBRC. He recently completed his PhD in Health Sciences at Simon Fraser University, with the thesis topic: Exploring Intersectionality as a Framework for Advancing Research on Gay Men’s Health Inequities. Craig Barron is a Canadian playwright and writer with many years of involvement in the HIV/AIDS movement. Craig recently interviewed Olivier about his research and involvement in gay men’s health.

Where are you from?

I was born In Sept-Iles, Quebec. I grew up in Montreal and moved to Vancouver in my early 20s.

What did you want to be when you were a teenager?

I wanted to be an artist. Either an actor or a film director. As a kid, I would tape the Oscars and watch it over and over again imagining what I would say when I would get my own golden statuette (Ha Ha!). I studied cinema in college but when it came time to go to University I chose sexology as a major at UQAM (L'Université du Québec à Montréal).

What gay themed books influenced you when you were young?

I grew up in the 1990s and did not have access to gay themed books. The first (and maybe only) gay novel I read as a teenager was Some Night My Prince Will Come, by Michel Tremblay (La nuit des princes charmants): an 18-year-old in 1960 makes a quest across Montreal to lose his virginity. I remember secretly taking the book from my older sister’s bookcase (Not sure why she had that book?). I read it with mixed feelings of excitement and fear. Tremblay remains one of my favorite authors.

Anything you want to say about coming out?

I have the most boring coming out story. No tears, no drama, no screaming. I just told my parents I had a boyfriend, and could he come for dinner? The answer was yes. I am lucky – I have heard many dramatic coming out stories in my years working in gay men’s health.

Did you see obstacles to having a full life?

I am not sure I did.

Did you formulate a career objective at some point?

I never did. I still don’t know what I want to do when I grow up.

What has been your work/career journey?

I have been extremely lucky. For the last 10 years I have worked in gay men’s health – doing something that I feel is meaningful but also very fun. I started doing park outreach in 2000 in Montreal. I was handing out condoms to men cruising the park (It was quite a discovery that men were cruising the park for me at the same time!). Then I moved to Vancouver and had the opportunity to work in many amazing programs and organizations: Gayway, HIM, Totally Outright. CBRC has been my home for the past 5 years.

You’ve just completed a PhD at SFU. What was your focus?

My focus was on the applications of intersectionality to gay men’s health research.

How do you define Intersectionality?

Intersectionality is also about how individuals and communities are shaped by multiple systems of power that are intertwined and intersecting: laws, policies, governments and other political or economic unions, religious institutions, the media.

For example, in the context of gay men’s health, nobody is just gay; and homophobia does not exist in isolation from sexism, classism, racism, etc.

Why was this so important to you as a field of study?

Since public health researchers have uncovered the multiple health inequities of gay and bisexual men, very little progress have been made to reverse them. For example gay men continue to carry the burden of HIV infections. Gay and bisexual men are 4 times more likely to attempt suicide. The problem is that while health is now understood by social factors (social determinants), this is not the case for gay men. Our health continues to be explained by public health researchers through our behaviours such as unprotected sex — an approach that tends to blame gay men for the epidemic rather than offering tangible solutions. More so, the vast majority of public health research falsely homogenize gay men by oversampling those who are white, highly educated, middle-class and cisgender; reporting results without due attention to diversity.

Intersectionality is a framework that addresses these limitations – it forces a much-needed consideration of power and diversity that are necessary to resolve health inequities.

Can you explain more about intersectionality as a framework for gay men’s health?

In my thesis, I used intersectionality to advance syndemic research. Syndemics refers to how multiple epidemics among a marginalized population (such as gay men) have a tendency to co-occur and fuel one another – as examples: substance abuse and HIV. In syndemic theory, oppression, violence, and marginalization are the root cause of these interacting epidemics.

Syndemic research on gay men suffers from a lack of attention to diversity and power. I therefore developed a framework that locates the production of interacting epidemics within a discussion of oppressions that include, but is not limited to, homophobia. Homophobia and other forms of oppressions operate at different levels: institutional, society, gay community level and within ourselves to produce health inequities that can turn into syndemics.

How were you able to use the Sex Now surveys in your research?

I used data from Sex Now in my dissertation to show that syndemics were unevenly distributed among gay, bi and MSM. For example, gay men were more likely to experience syndemics than bi and MSM partnered to woman. I also showed that aboriginal gay men were extremely vulnerable to violence and syndemics in comparison to Caucasian gay men.

What are the future challenges for gay men’s health?

We need to improve ways in which gay and bisexual men's health is understood and responded to; instead of “fixing” gay men, we need to change our social environments. More attention must be paid to mental health – mental health initiatives and research on gay and bisexual men are practically non-existent in Canada. What we’re up against: the newly formed Mental Health Commission of Canada does not include a single targeted initiative towards sexual minorities; in British Columbia, a recently launched 10-year plan on mental health does not have a single mention of gay men or sexual minorities.

We have the big job of disentangling interconnecting health problems in order to promote well-being among gay and bisexual men.

It has to be complicated because the world is complicated and gay and bisexual men are an extremely diverse population – relations of gay men to society and within the community are complex and diverse. The first step is to acknowledge that we won’t find a one-size-fits-all solution.

History – which is critical to understand the state of gay men’s health.

What do you learn from younger gay men (i.e. the Investigaytors) What do you want to hear?

The true meaning of social justice.

What are you currently working on?

I am working on two new projects that are extremely exciting. I currently direct a project at CBRC called Resist Stigma. The aim of the project is to mobilize and empower young gay and queer men into fighting stigma by producing online and digital stories.

I am also working on a study of gay and bi men’s experience with suicide. This project with the Men’s depression and suicide network at UBC uses PhotoVoice, a research method that combines the use of photography and qualitative interviews.

Is your PhD thesis accessible?

Yes, at the SFU library.

And what are your other interests in life?

Reading, biking, cooking. I picked up yoga last year and do it multiple times a week. I guess I have become a real Vancouverite now!

Where did you spend New Year’s Eve?

Tofino. It was my first time there. It's a beautiful place. The kind of place that makes me want to never leave BC.