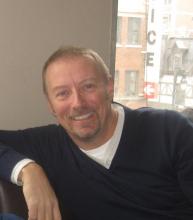 1.     What is your place of birth?
I was born in Moncton N.B.  Not the best place to be a gay teen in the 1970’s.  Like all small cities it has changed enormously in the last 15 years and now the rainbow flag flies at city hall on pride days.

2.     How did you get involved in gay men's health?
In 1984 I became involved with a group called Gays and Lesbians of Moncton.  We numbered in the 800’s.  It was an amazingly liberating experience for me.  In 1986, I moved to Halifax to pursue graduate studies in social work and volunteered at the Gay Men’s Health Alliance, which disbanded in 1987 and became the Metro Area Committee on AIDS.  I did my placement there and developed the first support services for ‘People with AIDS’ in the Atlantic Provinces.  It was a very tough time.  The vast majority of the men I worked with died in the first few months after meeting them.  I decided I needed to devote myself to not just supporting men with their diagnosis, but also do everything possible to keep more men from being infected.  I became adept at prevention at that point.  And I firmly believe that one cannot ‘do’ HIV or STI prevention in the gay community without looking at the broader picture of gay men’s health.

3.     Quantitative, qualitative or versatile?
A lot of both actually.  So I guess I am versatile.  Both have advantages and combining both kinds of research gives us fuller pictures, I believe.

4.     What social determinant of health impacts gay men the most, do you think?
I think there are a few that are important.  Let’s start with Early Childhood Development, then Social Supports, Education.  We advocated a few years back for Conditions that Support Choices about Coming Out as a determinant that should be added for gay men, or at least a lens through which other determinants should be interpreted.  The important thing to recognize, for me, is that the life trajectories, particularly in adolescence and in all the developmental challenges that are part of adolescence, are different and more challenging.

5.     What's something that everyone interested in gay men's health should read?
I was greatly influenced by a book called ‘Coming Out of Shame:  Transforming Gay and Lesbian Lives’ by Gershon Kaufman and Lev Raphael.  It’s about doing psychotherapy with gay men, but opens a huge door into the impact of homophobia and the devastation that it has caused in many of our lives.  It also points to ways out and healing.

6.     Do you have a favourite gay bar moment?
Where to start?  Bars are where I discovered friends and community.  I would have to say that, because I came out in Halifax, those first months of going out, meeting people, emancipation, discovering real authentic friendships and men were among the most liberating and fun years of my life.  I spent a lot of my time in that bar (Rumours) in those years.  But I have to say my most memorable moment was in Kyiv, Ukraine.  I have worked there on and off over the last 15 years and, whenever I am doing work in a new land, I try to make contact with and get to know the lgbt community and the issues they are living with.  Well in Kyiv it took me a long time to find a bar, and then I had to hitchhike out to it.  It was raining quite heavily the night I went, a car stopped and, as is the custom in Eastern Europe, the driver expects a little money for the ride.  I had to negotiate all of this in my very rudimentary Russian, and direct him to the address (actually I gave the address of the building next door.  When I got there, I had to knock on a non descript door, have a little slot open in front of me, and respond to several questions in Russian.  (I think they realized I was a tourist fairly quickly and they let me in.  The music was 90% Russian techno, and the dance floor was full of frowning dancers.  Then an Abba song would be played and everybody began laughing and smiling.  Several people approached me to talk, and I spotted a table speaking in sign-language!  I had studied American Sign Language for two years in Halifax and went over and asked if anyone signed ASL.  A few know ASL and we ended up having a (truncated, but very interesting) conversation about gay rights in Ukraine.  Who would have thought my ASL courses would come in handy, in Eastern Europe, decades after taking them??

7.     If you could poll 10,000 gay men, what two questions would you ask them?
How they take care of themselves would be the first.  So many of our studies are about deficiencies and problems that we forget the incredible resiliency that gay men have developed through the various life stages.    My second would be about dealing with homophobia over the course of their lives.

8.     What is the secret to a perfect relationship?
Don’t we all wish we had the answer to that one!   I think a relationship is hard work.  It’s about being open and vulnerable and willing to evolve with another person.   It’s about wanting to be there with the person you love and making the compromises necessary to reap the rewards and the joy of emotional and physical intimacy.  I also think it’s about not losing oneself in the relationship and having the balance between one’s personal needs and the needs of the other person and the couple.

9.     How would you describe your current work?
In the last five years I have decided to, as much as possible, do only what I enjoy doing.  I love teaching and have been putting a lot of emphasis on honing those skills and transferring, - through teaching and conferences - as much as possible, some of the values and beliefs that I have come to believe to be essential in terms of our vision of health in the lgbt community.

10.  What's the last piece of writing you did on gay health?
I’m writing an op-ed piece on the Russian anti-gay laws, which I believe are a watershed moment in the development of lgbt rights in the world.  I have always considered all forms of writing to be important, not just those pieces that reach academics, but more importantly those pieces that reach the wider public and, especially lgbt people.

11.  What gay man do you most admire?
There are so many men that I admire, but I have a special place in my heart for the pioneers, before Stonewall, decriminalization and into the 1970’s.   I would have loved to have been a little older and lived the years of the Body Politic and all the effervescence of that period.

12.  Where would you like to see gay men's health in five years?
Biggest hope?  Change in government!  The brakes have been applied since the Conservatives came to power, and if they could have reversed directions I think they would have.  We have been cast aside by the present federal government, their lack of vision, and their small-mindedness.  I cannot imagine that another regime could be worse to us than this one.  But we have been sidelined with many other populations and minorities in terms of health services and I hope to see that women, aboriginal people, street people, youth and lgbt people will be better served by the federal, provincial, and territorial governments that have an ethical and legal responsibility to take them into consideration.  A change in government will bring a breath of fresh air into all our work.