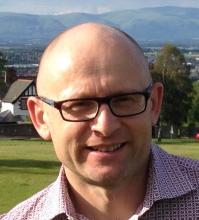 Ripon, England, UK – the smallest city in the UK.

I got involved through volunteering work within gay men’s peer education and community development as an undergraduate student in the late 1980’s. It was a fairly transformative experience.

Most definitely versatile – very open minded with epistemology - from in-depth phenomenological analysis of gay men’s experiences of unprotected sex, to cultural approaches to the aesthetics of the penis in contemporary cultures, to quasi-experimental studies of community led peer education to trial development and the evaluation of new technologies to improve gay mens’ sexual health and well-being.

I think homophobia probably has the most important role as an ‘upstream’ determinant of health. We know it intersects with so many other key structural factors, for example, poverty, ethnicity, social class and social capital. I think there’s a need to think about and do research which examines the impact of homophobia across the life course as it plays out within familial, peer, school, community and career contexts. I think homophobia  probably troubles every aspects of gay men’s development in one way or another – adding incremental health inequalities to many of us. I love gay communities and gay cultures-  but sometimes I think they’re not the best health promoting environments. This relates to where our cultures and communities have come from, and that in turn relates to homophobia.

This might sound rather random – but there is an old science fiction book by John Wyndam from the 1960s called ‘the chrysalids’ which is deeply psychological. I think it’s one of the most insightful accounts of invisible ‘difference’ and ‘in your face intolerance’ that exists. It’s fundamentally about being ‘different’ on the inside but looking like other family and community members on the outside.

I haven’t! I’ve just moved out to the countryside between Scotland’s two biggest cities.

Of course I’d be asking open ended questions to get the best out of my opportunity:

What do you think the biggest challenge is for gay mens’ health and well-being?

What’s the best moment of your life?

Respect, total honesty, patience and not taking each other for granted.

A mixture of social science and health research – in a way most of it is about individuals and communities adapting to change and innovation.

The last piece of writing I’ve done – and am still doing – is about gay men’s experiences of using Apps within the social media and sexual networking. It’s about the joy and pain of being turned into a profile or a GPS co-ordinate and being commodified and commercialized.  I think this is amazing in itself, but the analysis is also focusing on the embodiment issues that follow and also the challenges concerning learning new rules and cultures of digital etiquette and the partial way these draw upon earlier aspects of gay cultures.

This is a tough one – a choice between Alan Turing- the inventor of the modern computer and Gareth Thomas – the Welsh rugby player.

Having embraced a sense of the whole portfolio of the determinants of wholistic health. So thinking about the wider determinants of health and well-being as well as the more proximal determinants (e.g. from homophobia and poverty to condom use and self-testing uptake). I also hope there will be a focus upon a wide-range of outcomes reflecting wholistic health. For the individual these would encompass the emotional, cognitive and behavioural, but for families and communities a wider range of outcomes – skills and abilities, resilience, social support and social and cultural capital.