Not Yet Equal: health of LGB Youth in British Columbia 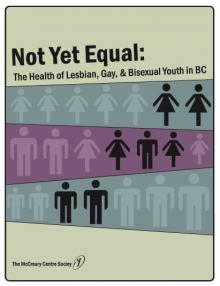 Unfortunately, most countries around the world have a history of stigmatizing relationships that are not heterosexual. In some countries today, same-gender relationships are still illegal, and lesbian, gay, and bisexual (LGB) people face harsh discrimination and penalties for their relationships and identities. Even in countries like Canada, where two people of the same gender can legally marry, negative attitudes about LGB people persist in many communities. Such stigma can create challenges for the adolescent who is beginning to recognize a lesbian, gay, or bisexual orientation.

A growing number of research studies in the United States and Europe have identified higher risks for negative health outcomes among sexual minority or LGB youth compared to their heterosexual peers. Some of these studies have linked such health disparities to the stress they face from stigma and discrimination, and from the related risks of rejection and violence. There has been very little research documenting the experiences of LGB youth in Canada, especially at the population level, and to our knowledge, there have been no studies in North America that explore trends over time in the population of LGB youth, their health disparities, their risks, and their strengths.

All young people, regardless of sexual orientation, deserve the opportunity to grow and thrive, in their families and their communities, reaching the promise of a healthy and productive adult life. Understanding risks and protective factors in their lives can help guide strategies for creating those opportunities.

In this report you will find the results of a series of studies about the health and lives of LGB youth in school across British Columbia, and across more than a decade.