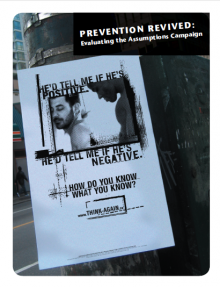 Evaluation of a national prevention campaign for gay men lead by Gayway at AIDS Vancouver.

As the trend toward increasing HIV infections amongst gay men began to get noticed within the health system in recent years, many wondered why. Most people believed that government funded HIV/AIDS programs were promoting prevention amongst gay men. How had the policy failed? Had gay men grown tired of safe sex? What happened to all the money? Few had noticed the enveloping silence over gay men’s prevention which had mounted over years of incremental loss of budgets, personnel and programs (Marchand, 2002). In any case, everyone assumed, even gay men themselves, that HIV was a diminishing issue (Stall, et al., 2000). So, everyone assumed.

Nevertheless in 2003, against this backdrop of increasing HIV infections, confusion and denial, Health Canada sponsored an initiative to reinvigorate gay men’s prevention Canada-wide and AIDS Vancouver rose to the occasion with a proposal. Ironically, the proposed project was all about assumptions.

The Assumptions campaign was designed in San Francisco to speak directly to what gay men assume in the post AIDS world. According to an independent evaluation (Binder, 2001), the campaign had gone so well in the United States that AIDS Vancouver proposed adapting it for Canada. So began a year long experience of uncovering what we assumed about Canada.

In this evaluation report we describe what happened when AIDS Vancouver and its partners in six Canadian cities engaged the adaptation, development and deployment of the Assumptions campaign. The Community Based Research Centre (CBRC), under the direction of the authors, undertook a comprehensive study of the initiative including formative, process and outcome evaluations based on recent thinking about evaluation research for health programs. By all accounts the Assumptions campaign played out very successfully in Canada. We will demonstrate how we know through empirical evidence collected during the campaign’s deployment and from gay men themselves on the streets of cities nation-wide.

The Assumptions campaign was fi rst released by the San Francisco AIDS Foundation during the summer of 2001. The concept is the creation of Cabra Diseno studio and is based on extensive research of the Center for AIDS Prevention Studies at the University of California San Francisco. Those studies indicated that gay men who engage in unprotected sex often do so assuming they “know” the sero-status of their partner.

The campaign’s images are grainy and intentionally designed to be read in the cultural code of contemporary gay men. The texts represent the interior monologues of men depicted in the images and make liberal use of irony to destabilize the certainty of their assertions. The campaign’s slogan, “How do you know what you know?” takes a deconstructive swipe at the assumed “common knowledge” of post AIDS gay men. (see illustrations)

The task for AIDS Vancouver’s gay men’s prevention team was to engage a string of partners from east coast to west in adapting Assumptions for Canadian audiences and their values and deploying the campaign to major cities across the land. Such a feat had never been previously undertaken in Canada, even in the worst of the mid 1980–90’s AIDS crisis.