Rivers of our Lives: transitioning environments in the life course of gay men 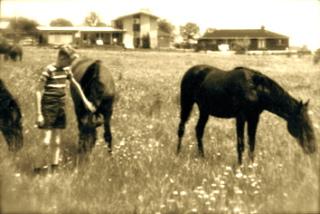 There was a river that ran through a small town in Southern Ontario. It led to a network of warm summer lakes. Behind a house on the outskirts there was a beautiful pasture; there are photos of a young adolescent boy surrounded by horses, completely at ease.

A brand new brick bunker up on a hill, my first high school, overlooked the lovely river. I knew the river view well because I usually sat gazing at it from behind the cafeteria's wall of picture windows. I’d have my fine lunch, alone: always fruit and something fresh-baked brought from home. An uncomfortable home - a place that I didn’t want to return to at the end of the day.

We could see the river from the windows of our grade 10 English classroom. We read Huckleberry Finn that year. I’ve kept the essay we were assigned, the question posed: To what extent is Huck’s escape not a rejection of society but a quest for the ideal society? One of the profound 15 year old perceptions that I wrote: “Huck views society as a very real and constant struggle of man against himself – of which he is a victim.” Another of my telling observations: “He was born a type of cast-out from society as the river is so often foreign to the land.”

I’d stay at school until closing time. I’d found probably the one book in our windowless library with anything remotely connected to homosexuality: The Agony and the Ecstasy, by Irving Stone, a novel about Michelangelo. A thick read.

Getting hooked on reading saved me more than anything else did in that town. A few interesting detours along the way and I moved right along, through my own resources, from Huck Finn to Myra Breckinridge and The Valley of the Dolls. In those books I saw that there was another world out there, beyond the town on the river, waiting for me to find.

To all appearances it was a healthy and secure place for youth. Just not gay youth. That concept didn’t even exist in 1969. The risks of being identified gay back then were grave: fear, hatred, rejection, violence. Nowadays the words most often use are stigma and homophobia and their stealthy byproducts, the oppressed feelings and crushed identities that we internalize.

I saw only a grim future in my home town. There was nothing of me there and I knew I would have to leave to become a whole person. But it also meant leaving behind the good things that it offered: the security of familiar faces; the abiding beauty of the place. And the river.

There had to be somewhere else for me. The mystery and potential of the big cities, the ones I already knew: Toronto and Montreal were evidently places of many sorts of riches. Like so many other young gay men, forced out of small towns, pulled to big ones, displacement was inevitable.

As a young man alone in a big city I saw real possibilities for community and a charmed life. But big cities had their dangers too, both imaginary and real. I saw damaging temptations: a culture of alcohol and drugs; abandoned career ambitions; low self-esteem. The boys on the streets close to the YMCA made prostitution into a rite of passage like Jean Genet or John Rechy’s City of Night. And there were new possibilities for hatred and violence. Crowds gathered to throw eggs at the gay men leaving the St. Charles Tavern on Halloween in Toronto in the early 1970's.

Dislocation is a challenging part of life for many gay men and full of risks. Our personal strategies for coping with it are not always healthy nor are the social circumstances. The stress of it can have a large impact on health. That's what is meant by Social Determinants of Health. Healthy lives are more than having good genes and good luck but an entanglement of social experiences and societal influences. Dislocation is a worthy place to begin tracking how social determinants affect gay men’s health.

The Public Health Agency of Canada (PHAC) lists twelve Determinants of Health. They say nothing specific about how gay men are affected. According to PHAC sexuality is not even considered a determinant of health.

Funny that, especially when for several years we’ve had data in hand such as David Brennan’s Men’s Sexual Orientation and Health in Canada. He analyzed the 2003 Canadian Community Health Survey, the first national population survey to ask questions about sexual orientation. Brennan’s analysis showed that gay men were much more likely than straight to have mood or anxiety disorders and significantly greater lifetime histories of suicide. Gay men were also nearly six times more likely to have been diagnosed with an STI. Sexuality must be playing some kind of role.

We also know from other studies that LGBT youth are at a much greater risk of attempting suicide than their straight counterparts. Estimates of HIV in the urban gay male population are 1 in 5 but 1 in 1,000 in straight men. Evidently, sexuality does seem to determine at least these health outcomes.

Today, big cities like Montreal, Toronto and Vancouver are often touted as the world’s best places to live. Hundreds of thousands of gay men now celebrate Hallowe'en in the streets along with their supporters and allies. But the party is not for everyone. For dislocated young men, the big cities have become an expensive place to be living on the run. There is an urgent need of stigma-free shelters for homeless gay youth. And the barriers to getting better are everywhere.

The river still looks lovely in that Southern Ontario town and it still exerts a powerful draw. But do I still have the option of relocating back there? Some things have changed. Not long ago, some grade nine students created a public performance called Coming Out Proud; there is now a local Gay Straight Alliance at the high school; and even downtown Drag Races with cross-dressing participants. To say nothing about the possibility of a fine, rural, gay marriage.

Will the river bring me back to a comfortable place that I want to return to at the end of the day? I still wonder about the reception gay men get in health care. I suppose it will take first hand experience to really know.