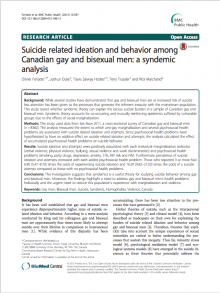 While several studies have demonstrated that gay and bisexual men are at increased risk of suicide less attention has been given to the processes that generate the inherent inequity with the mainstream population. This study tested whether syndemic theory can explain the excess suicide burden in a sample of Canadian gay and bisexual men. Syndemic theory accounts for co-occurring and mutually reinforcing epidemics suffered by vulnerable groups due to the effects of social marginalization.